This is the last post in a series about our recent anniversary motorcycle trip. If you’d like to start from the beginning, go here. I’ve added links at the bottom of each post to take you to the next installment. 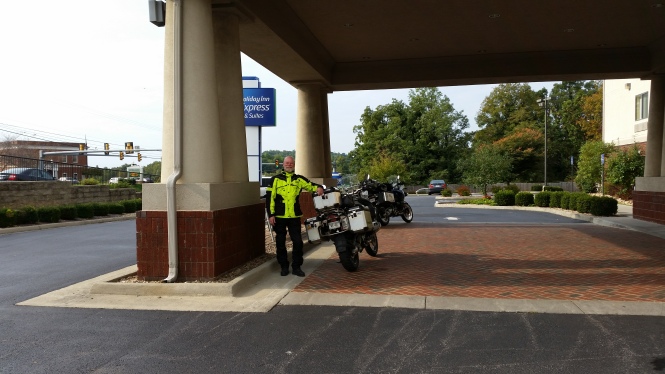 Starting our morning in the hotel portico 🙂

Our plan for Day 7 was to follow the GPS on the curvy roads, continue to smell the roses and see the sights on our way to Boone, North Carolina for the evening. Zumo took us on Hwy 40 west, aka the ‘Charity Highway’, which certainly lived up to the curvy description, as did a few tiny county roads we traversed, and Hwy 8 to Woolwine. Here we detoured to see the Bob White covered bridge, which was built in 1921 to allow access over the Smith River to the Smith River Church of the Brethren, and was in service for more than half a century.

The Smith River and church beyond the trees

Adding to the revelations gleaned from this trip, we realized that we most enjoy the roads with signage that says something to the effect of “not recommended for 18-wheelers or vehicles over 25 feet.” 😀 This will be an important distinction, when we are finally able to buy that RV, and hit the road. We will have to get to an area via the straighter roads, then park the RV, unload the bikes, and hit the curvy roads; like tiny planets orbiting around our sun. We practiced that a bit on this trip, finding a hotel base and looping out each day to ride and see the sights. One day, hopefully soon, that base will be our home on wheels!

Our next stop was along US 58 West at the Lovers Leap overlook, a small pullout along a two-lane, narrow route through the mountains. Unfortunately, the semi trucks do not avoid this route, being a major East-West thoroughfare, and we saw them whiz by in our peripheral vision while looking out at the view. 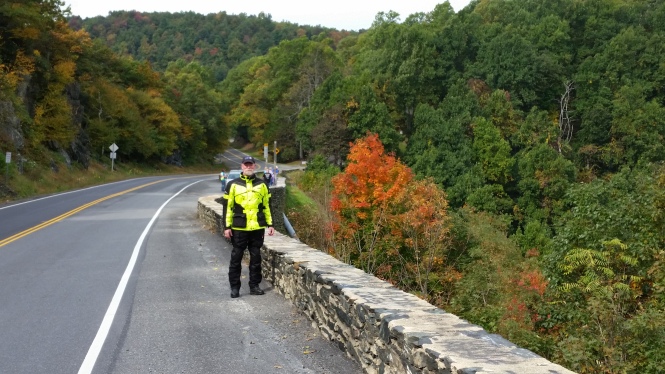 A semi-free moment at Lovers Leap

The Lovers Leap legend has it that a young settler met the daughter of the local Indian Chief, and they fell madly in love, only to be shunned by their respective communities. With this lovely view as a backdrop, they jumped to their deaths, ensuring their love would endure for eternity. Sad, but romantic… 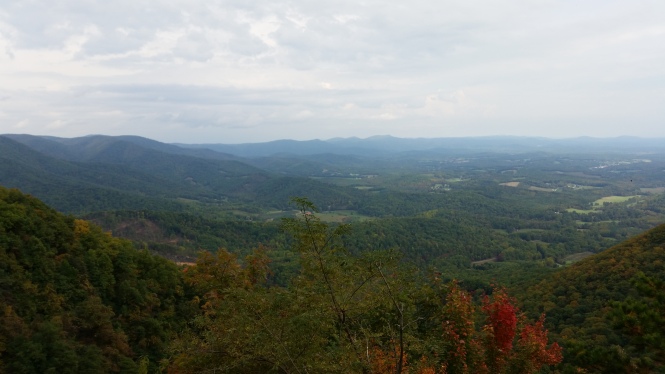 Lovers Leap view on US 58

Next, Zumo routed us on the Blue Ridge Parkway (BRP) at Meadows of Dan, where we took in expansive mountain views, contrasted with areas of large trees that formed tunnels overhead and gave the lush rhododendron enough shade to flourish. We made a mental note to return when the rhododendron are in bloom, a spectacle in the spring not to be missed.

One of the highlights of this part of the BRP is the Blue Ridge Music Center, where we stopped for the first time to browse the museum and enjoy a casual mountain music jam, very similar to the Appalachian jam that is held every Saturday in downtown Dahlonega!

Here is a Jam version of Amazing Grace for your listening pleasure!

One of the gorgeous instruments in the Music center museum

The Blue Ridge Music Center is one of the features of a unique tourist draw in existence for about the last ten years, Southwest Virginia’s Heritage Music Trail, The Crooked Road. The music trail winds it way throughout the region, highlighting quaint towns, and showcasing music and historic venues that document this area’s influence over music genres including country, blues, gospel, shape note, and bluegrass, and invoking names like Carter, Monroe, and Stanley.

After our musical interlude, we followed the GPS south toward Sparta, North Carolina, and into the rain. It didn’t just rain, it poured! There were rivers of red mud running across the roads, which is always fun to navigate on a motorcycle. 😉 We got through the heavy rain safely, and continued through the busy afternoon traffic in the town of Jefferson and onto NC 194 toward Boone. As we made our way on this wonderful twisty road the fall color was amazing and the downpour improved to light sprinkles. We checked into our hotel in Boone then headed to Blowing Rock for an early dinner. It was so early in fact that we walked around town for about 30 minutes before the restaurant opened for dinner.

Is this Blowing Rock, or Mayberry? 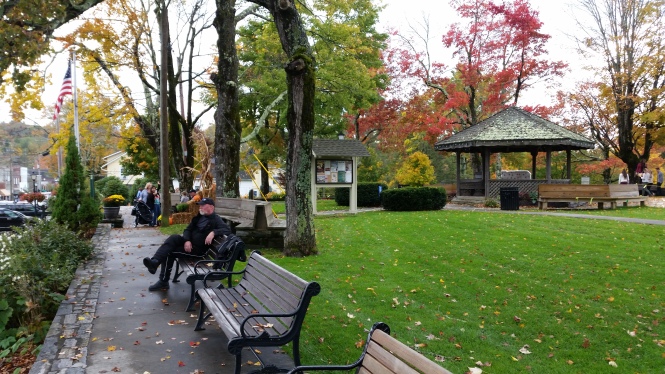 Hub sitting in the city park before dinner

The Speckled Trout Cafe had a unique appetizer that simply required a try: deep fried black Olives stuffed with Asiago cheese and served with a homemade creamy dill sauce. Yum!

The olives were followed by Cajun blackened fresh river trout with homemade sides, and dinner was fantastic! It had been a long day, so we enjoyed a jacuzzi back at the hotel and called it a night.

Day 8 started with a quick breakfast in Boone and we were fortunate to pack the bikes in the sun before heading south on Hwy 105 in a mountain drizzle. As we passed through the Grandfather community, the autumn colors cascading up Grandfather Mountain would have made the perfect flaming fall postcard. I know, I know; no pics, so it didn’t happen. But seriously, it was drizzling, there was a ton of weekend traffic, no safe place to stop, and the camera couldn’t capture the essence of it anyway. That’s my story, and I’m sticking to it.

We continued down US 221 south through several ritzy Linville communities, then hopped back on 194 south for some riding excitement over to US 19E. At Spruce Pine, we headed south on 226 and then made a stop at a large RV dealer in Marion, NC, to walk through dozens of RVs. We didn’t find the Goldilocks fit this time, but it was fun to look and dream! When we returned to the bikes after RV hunting, we found a note tucked into my jacket, from another fan of the old Two Wheels Only (TWO) motorcycle-only campground in Suches, GA, who saw our TWO stickers on our bikes. Sadly TWO ceased operation in 2010, but the good news is that it has now been resurrected in the form of Two Wheels of Suches (TWoS).

This was the warmest day we have had on our trip so far, and the RV-hunting was at the lowest elevation as well, so we were toasty walking and then touring in our full gear. It was lovely weather for a meal al fresco however, so we stopped at the Black Mountain grill for a tasty lunch.

View from our lunch table

Our aim was to take US 70 west to the Blue Ridge Parkway, just before Asheville, and then head up to Little Switzerland for our anniversary night stay. Since it was a Saturday in October, there was a ton of leaf-peeper traffic on the BRP but we passed the slow pokes when possible managed to be patient. The fall color was incredible at elevation around 5000 feet and we enjoyed the ride, and the views! 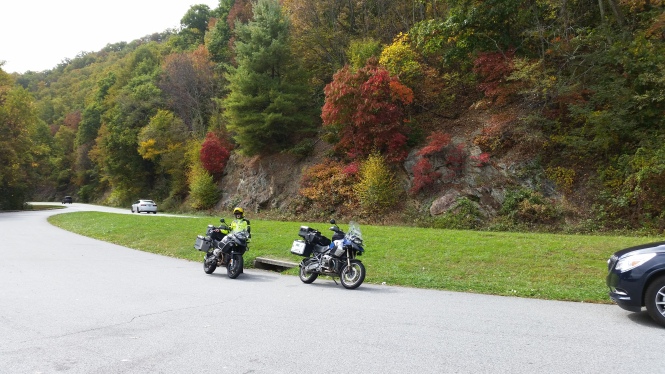 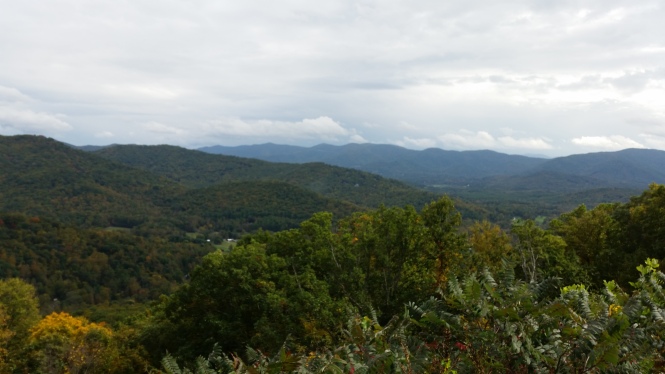 Just one amazing view on the BRP

In the blink of an eye, we arrived at the only commercial hotel directly on the BRP, and the view from the Heidi suite at the Switzerland Inn was even better than we imagined! 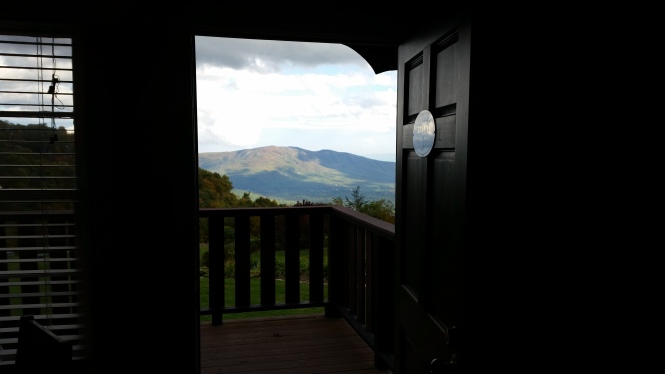 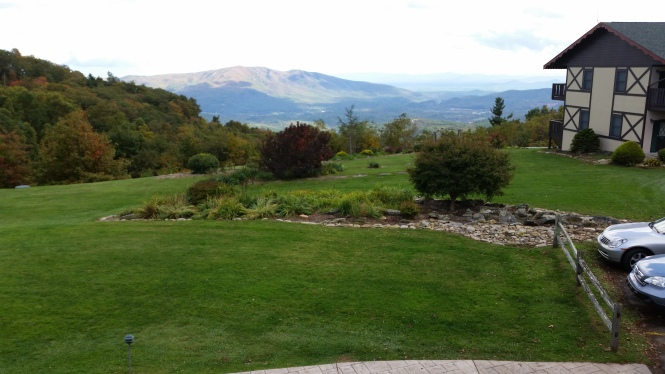 We sat on the lawn and marveled over the peace and beauty of the mountains, and counted our blessings. The anniversary of our 17 years of wedded bliss, the absolute GIFT of our shared love of motorcycle travel, and just generally how fortunate we are to have found each other. ❤

We did have a nice dinner in the restaurant, which was only marred by the fact that the waitress had never used a smart phone camera (!) and could not manage a photo. In the dark of the restaurant (by this time), even the selfie attempts failed! It’s ok, we had our selfie from cocktail hour earlier:

In contrast to our beautiful view from the Switzerland inn last night we woke on Day 9 to rain and pea soup fog. 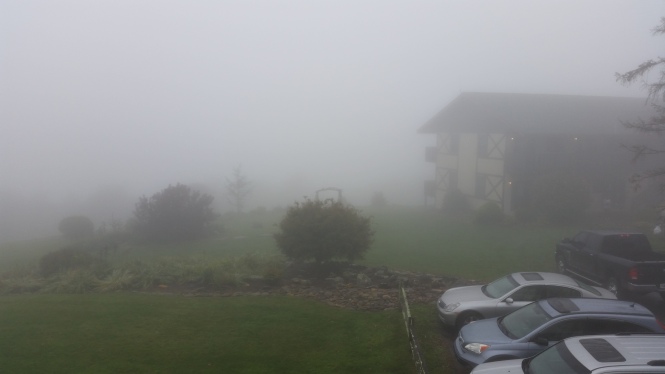 We enjoyed a great breakfast buffet and then packed up and headed down Hwy 226A, known in motorcycle-road parlance as The Diamondback. It is an intensely twisty road, with many switchbacks, but taken carefully due to the conditions, it wasn’t nearly as bad as we expected. The fog cleared gradually as we descended, the fall color became more brilliant, and we enjoyed splashing through the leaves. Once down from the mountain, we gassed up and bee-lined it to I-40 and headed west and then south.

Even along the highways, the autumn color was wonderful. We stopped for our only break at an overlook on US 64 that provided a wonderful mountain view of sun, clouds, and fog, and changed every few minutes.

Now you see it… 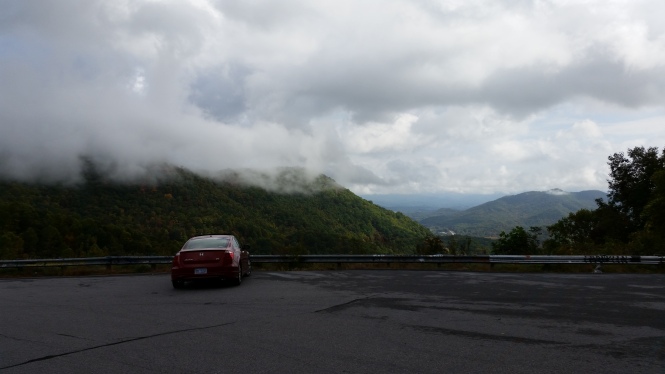 We went in and out of clouds but really had no rain until we got into Georgia. We took a back road short cut over to us 129 south and now we were on our familiar roads and on our home stretch!

We unpacked, got changed, and headed up to the reopening bash of our neighborhood Irish pub, Shenanigan’s. It’s been a long seven months since the pub burned, and we were very happy to be back to celebrate the reopening! 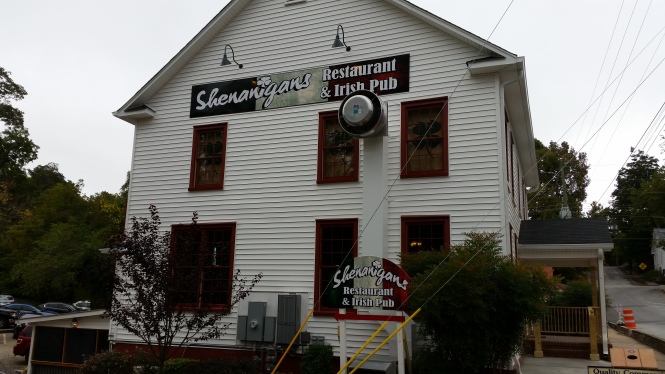 Our ‘Cheers’ has re-opened!

It was SO wonderful to have completed just under 2000 miles on this excellent motorcycle adventure, but it’s also good to be home. Thanks for riding along!