After experiencing a true ‘bucket list’ trip last summer via RV with motorcycles in tow, but not blogging about it at all, I turned on the fountain last week with Part 1, and it appears to still be flowing. I am going to take advantage of it while it lasts!

It may sound as if this is all about the RV, but to really ‘get’ us, you must understand that my husband and I are motorcyclists first. Until we retired, we rode everywhere. As far west as Montana, as far north as Nova Scotia, but we were always racing against the clock, running out of vacation time. When we retired, we bought our RV in order to get to remote areas of the country, take our time, and ride our bucket list roads!

There are many opinions about the best rides in America, but considering other events we planned to attend later in Montana, our first bucket list destination was Cody, Wyoming. This cute western town has perfect access to the legendary Beartooth and Chief Joseph Highways, in a scenic loop that will not disappoint. Not to mention the Absaroka range of the Rocky Mountains, Yellowstone, and the Shoshone National Forest all within spitting distance. We were in Heaven! 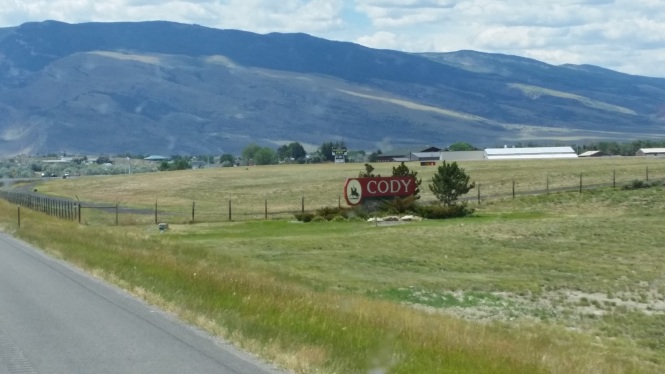 For the RVers among you, we stayed at the Absaroka Bay RV park. It was on the east end of town, walking distance to a few things like a grocery store and coffee shop, but not much else. Restaurants, shops, and the museum were 5 – 10 minutes away on the bikes. It was a fairly typical park; big rig capable, limited space between sites, but reasonably priced, clean and comfortable. Frankly, we were on the bikes almost constantly, so it really didn’t matter. If we were to return, we would probably try the Ponderosa Campground, mostly due to its location at the west end of town, right by the Buffalo Bill Center of the West museum and much closer to shops and restaurants. We enjoy walking to eat after a ride, and a couple of miles is ok, but not 5 miles. Each way. 😉

We got the rig settled and set off to explore Cody and grab a bite to eat. We stopped at the museum, to photograph this impressive monument to its namesake. 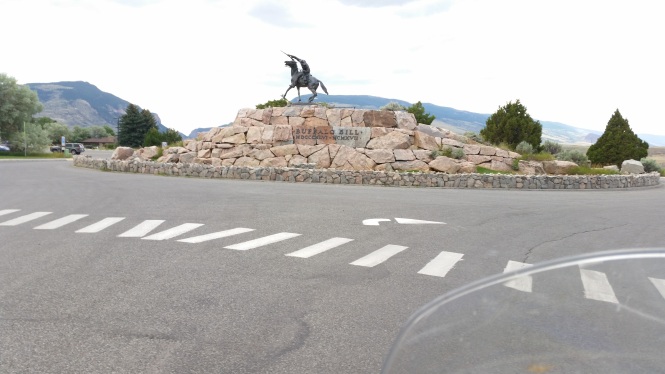 Life size statue of Buffalo Bill on his horse, Smokey

Then we checked out the historic Irma Hotel, built by Buffalo Bill in 1902 and named for his daughter. It has a nice saloon, open to the sidewalk, and great for people watching. 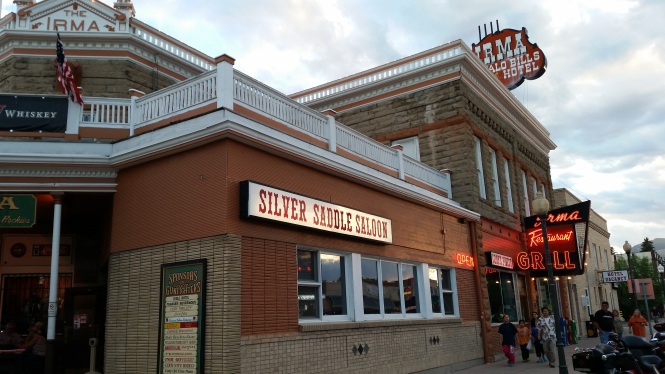 We had a disappointing meal at a poorly staffed Mexican restaurant and then headed back to the coach to rest and get ready for the next big riding day. As we were getting the bikes put away, and taking off our gear, here comes another coach, with another trailer like ours, and it pulls in right beside us! Unbelievable!

What are the odds? Two Ironhorse trailers, side by side in an RV park about 2000 miles from our respective homes!

We had to admit, the ease with which the driver pulled into his space, perfectly straight while waving to us with one hand, caused these newbie RVers some serious RV envy! 😀

We visited with Brian, and his wife Anne once they were parked and were amazed to find not only did they have a coach and our same trailer, but they were towing a BMW 1600GTL and spending 5 months traveling around the country and riding fabulous roads! They had recently stopped to get married in a dream ranch wedding, so they were newlyweds to boot. Our riding schedules didn’t work out during the stay in Cody, but I am happy to say that we have kept in touch, and visited them during a fall trip to Myrtle Beach, SC, where they have made their home. We are also looking forward to sharing the great roads in GA/NC/TN with them in the spring.

The next morning we were off bright and early to tackle two bucket list roads, the Chief Joseph and Beartooth scenic byways. We planned to ride the legendary loop in a clockwise direction, so we headed north out of Cody on WY 120, past gorgeous semi-arid hills with fantastic rock formations carved by the forces of nature, to the intersection with Hwy 296, the Chief Joseph. 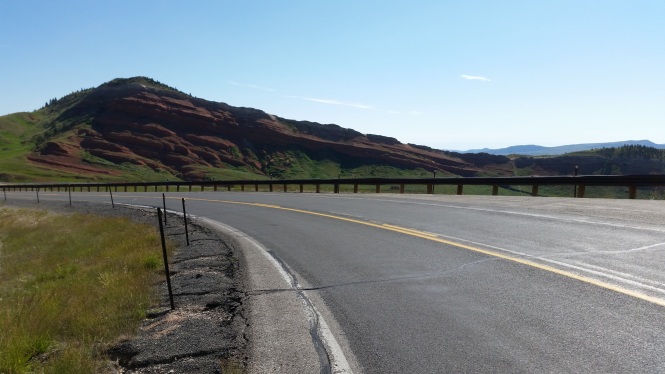 The Chief Joseph is 47 miles of asphalt bliss, with views of the Absaroka range to the south and west, the Beartooth range to the north, and the highlight of Dead Indian Hill Summit (8060′) to explore. We were visiting in prime summer construction time, so we waited patiently at a flagman stop for our chance to stop at the Pass, take photos and marvel at the view. Other than the construction stops for maintenance on the road shoulders, traffic was really very light, even in mid-July. Riders paradise! 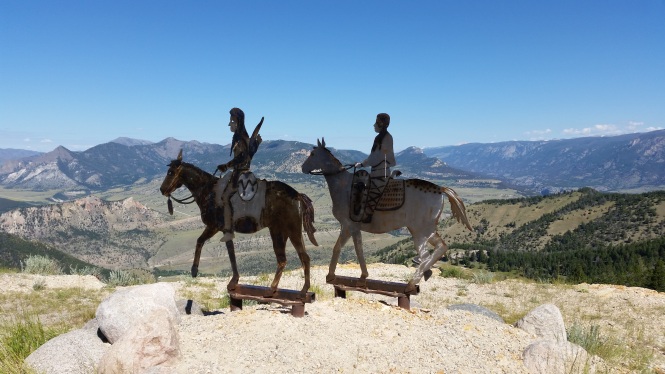 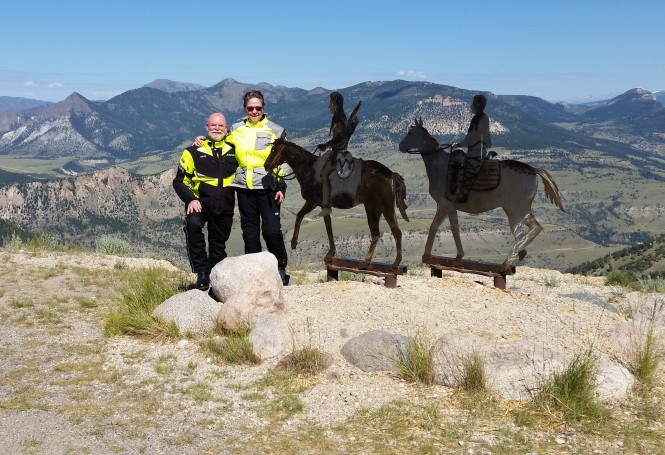 A close-up for the obligatory motorcycle rider shot

A panorama of the incredible view from Dead Indian Hill Summit

This mountain pass was the one and only portal to the west for migrating herds of wild game, Indian hunting parties, and sadly, Chief Joseph’s retreat with the Nez Perce in 1877, pursued closely by US Army soldiers. 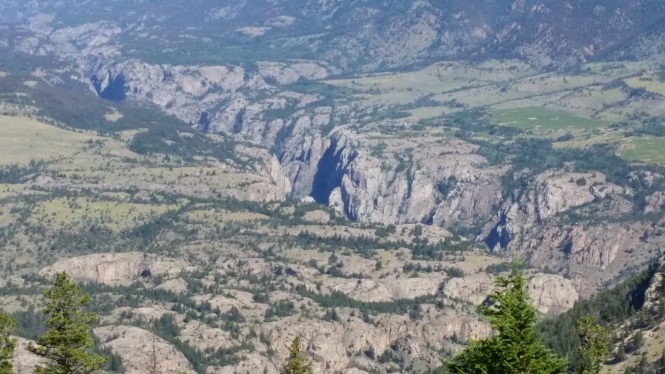 A closer view of the canyon in the distance, carved by the Clarks’ Fork of the Yellowstone River 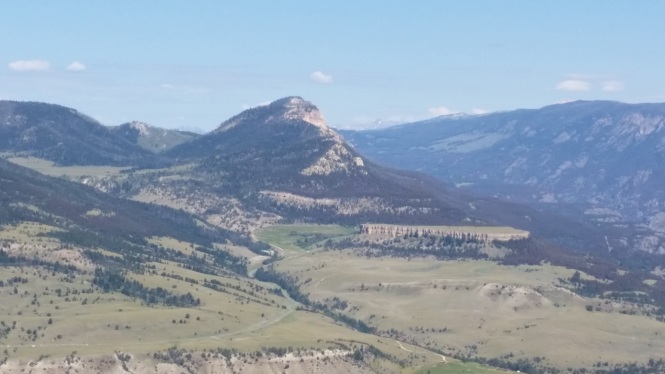 You can see the highway continuing in the distance, past an enormous bluff to the right of the road 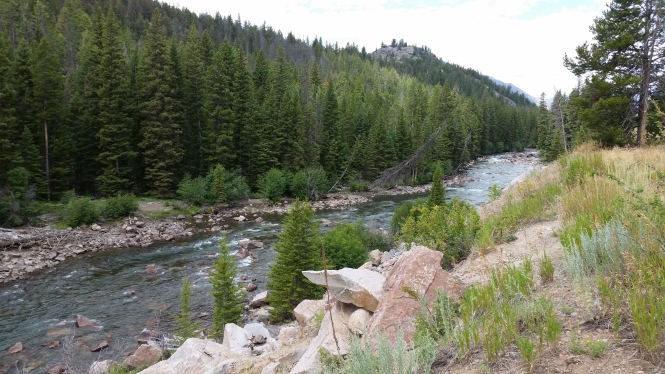 The Clarks’ Fork of the Yellowstone, at river level

Pilot Peak, the “incisor” of the Beartooth range

When you see Pilot Peak, in the photo above, you know you are nearing the end of the Chief Joseph, and approaching the Beartooth Scenic Byway, US 212. Charles Kuralt once called the Beartooth “the most beautiful drive in America” and it truly must be seen to be believed. At the intersection of 296 and 212, you can go left, toward the Northeast entrance of Yellowstone, or right, over the 10,947 foot crest at Beartooth Pass, on toward Red Lodge, Montana. We chose right. 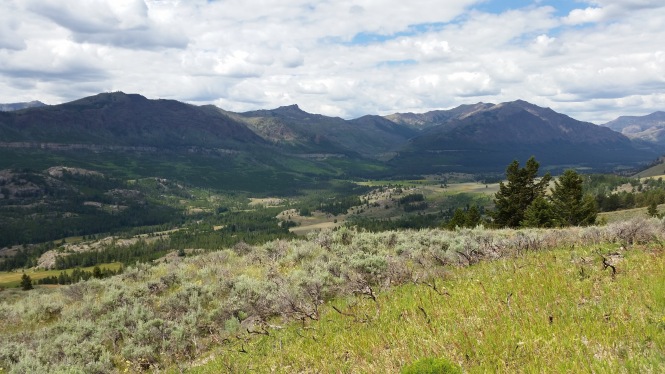 Another view of Pilot Peak from the Beartooth

Our second stop was at the Clay Butte Fire Lookout tower road, and as we began the climb up 3 miles of sketchy gravel and blind hairpin turns, we anticipated panoramic views of the Absaroka and Beartooth ranges at elevation 9811. But it was not meant to be. At about 2 miles up, we encountered a locked gate, since the visitors tower is closed on Mondays. 😦 Boohoo! We did get some great photos, including one of the two of us by a sweet elderly gentleman who had apparently never used a smartphone camera. It only took about 50 tries…but we certainly appreciated the effort! 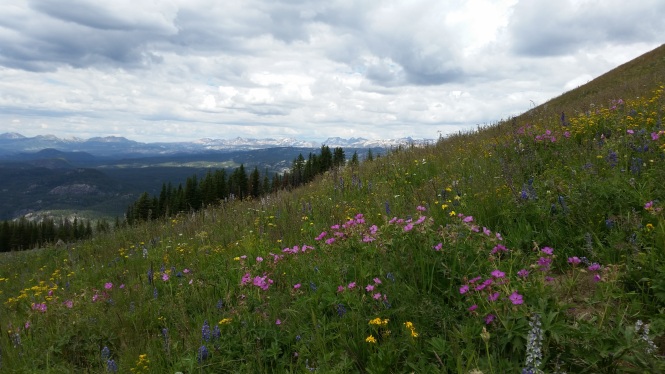 Are we sure we’re not in the Alps? 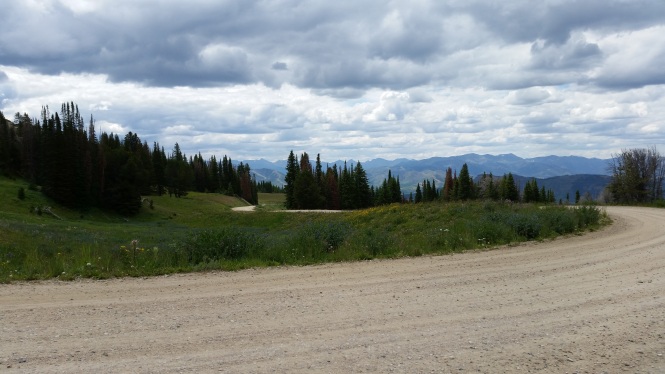 The road back down just below the dreaded gate. Smooth here!

Well earned photo of the two of us!

Our next stop was quick, at the Top of the World store, for snacks. We were still hours from Red Lodge, and this would hold us over until dinner.

We stopped for a snack, as we were still hours from Red Lodge

Although I will try, pictures simply do not do this national treasure justice. Where else could you have the chance to experience untouched alpine landscapes, frigid mountain lakes, lush forests, and alpine tundra all on a single road? It is one of the most rugged areas in the lower 48 states, with 20 peaks reaching over 12,000 feet in elevation. From the highway, you can see (and sometimes reach) glaciers on the north flank of nearly every mountain peak over 11,500 feet high. The Beartooth highway is the highest elevation highway in Wyoming (10,947 feet) and Montana (10,350 feet), as well as, the highest elevation highway in the Northern Rockies. It is simply unmatched, in our experience.

The bikes parked in the Beartooth summit parking area, in front of a glacier!

Panoramic view from the summit. Simply beyond description!

In addition to the breathtaking scenery, you can see a few of the dozens of hairpin turns that make this road so much fun! 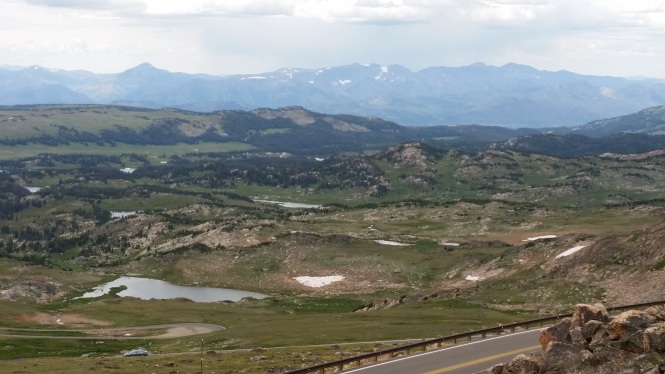 The view leaves you speechless!

A glacier and the wild, boulder-strewn alpine tundra 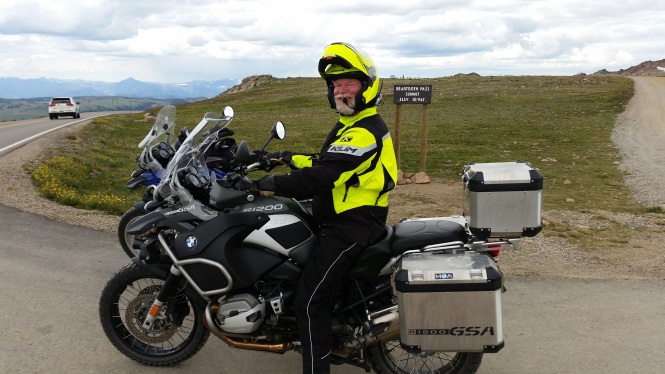 A few additional views of the Beartooth once into Montana, where you encounter another set of hair-raising hairpin turns! 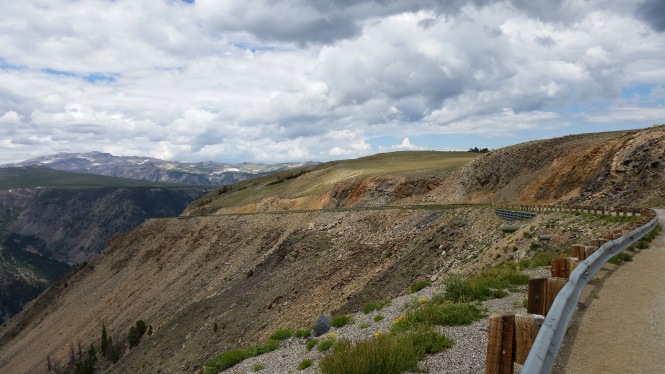 The road curves down and then up again, in a roller coaster of motorcycling bliss!

Peering down to the road clinging to the mountainside below; yes, that’s where we are headed 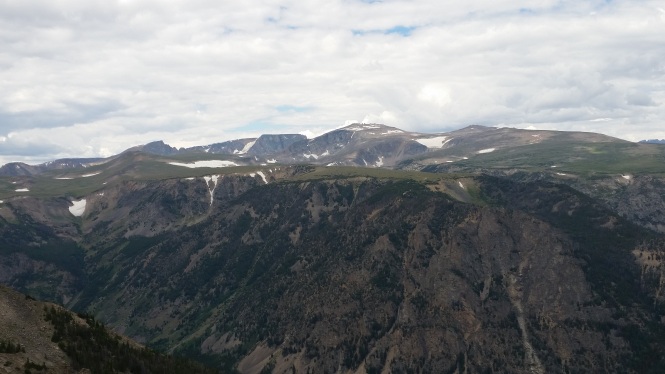 One final shot, trying in vain to capture the majesty! 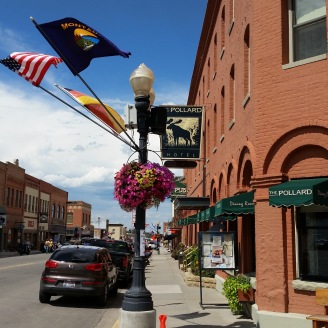 After scrumptious burgers in very quaint Red Lodge, we headed back to Cody, completing ~ a 130-mile loop in around 10 hours. Seriously, give yourself plenty of time to savor and enjoy this bucket list adventure. We were sad for the day to end, but enjoyed the ride as the last rays of light waned on our return to Cody.

Next up, a glimpse of the Buffalo Bill Center of the West, and a jaunt into Yellowstone! If you’re ready to read on, you can do that here.

20 thoughts on “About last summer, Part 2-Cody and the Chief Joseph and Beartooth Scenic Byways”