Years ago, a motorcycle friend told us about an odd Stonehenge-like structure in the rolling hills of Georgia near the South Carolina border. It seemed like a perfect motorcycle day ride. But we didn’t get around to doing it.

A couple of months ago, I happened upon a blog whose author had packed up her family and driven 5 hours to see this oddity, and my interest was rekindled.

The weather has been typically odd this winter in North Georgia. In late February, it had been cold and mostly rainy, but the weather report showed sun and mild temps for the upcoming Tuesday. The beauty of being retired…Tuesday is perfect for a motorcycle ride. Tuesday came, and lo and behold, the weather guessers were right! So, by 10 AM, we were headed east toward the small town of Elberton.

There was no direct route. The east-west roads in North Georgia meander around farms, rivers, and streams, so we spent about 2 hours touring in the countryside. As we approached the area where Google maps told us we would find the Guidestones, we actually were able to see them, peeking over the top of a small hill. Bingo. There was a small gravel parking lot at the edge of a cow pasture, complete with cows, and then we were face to face with…this??? 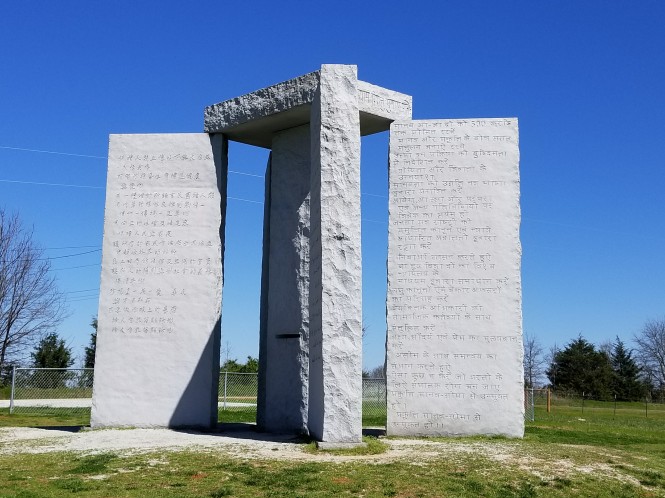 Atlas Obscura has an interesting page on the Georgia Guidestones.  In part, it reads:

In June of 1979, a man going by the pseudonym of R.C. Christian approached the Elberton Granite Finishing Company with the task of building a monument. He said that no one was to ever know his true identity or that of the group that he was representing. He seemed to have an endless supply of money to fund the project and by the terms of the legal contract all plans had to be destroyed after completion and all information about him withheld from the public.

In 1980, the stones were finished. They carry a tablet in front proclaiming, “Let these be guidestones to an Age of Reason.” Engraved in the stones are ten guidelines meant to re-establish the planet and society, perhaps after an apocalypse. They are written in eight different languages, English, Spanish, Swahili, Hindi, Hebrew, Arabic, Chinese and Russian.

Elbert County is known for its high-quality granite, thus it was the perfect location for this monument built of 5 enormous granite slabs, arranged in a standing paddlewheel configuration with a granite capstone, reportedly weighing over 200,000 pounds in total. The entire structure is astronomically aligned and the center stone has two special features: first, the North Star is always visible through a special hole drilled from the South to the North side of the center stone; second, another slot aligns with the positions of the rising sun at the time of the summer and winter solstices and at the equinox.

Because of the mysterious process of contracting for and building the structure, as well as, the fact that the plans were ordered to be destroyed upon completion, we may never really know the origin or purpose, but the guidelines repeated in eight different languages are as follows:

I guess it’s far too late for number 1, but many of the other guidelines do seem perfectly reasonable to me, especially numbers 7 through 10. I especially liked that “leave room for nature” was repeated twice!

Close-up of the English guidelines

View through the center stone to the North Star

Jerry gives perspective to the size of the structure

Off to the side of the monument, a granite tablet provides an overview of the structure and its mysterious beginnings. Zoom in to read more. 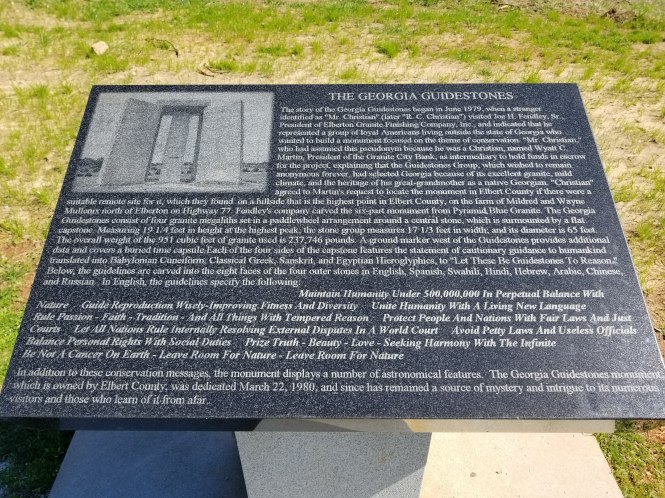 At the base of the Guidestones, yet another granite tablet provides some of the details and specifications of the structure, including the placement of the languages. It also mentions a time capsule buried underneath it, however, the contents of the time capsule are yet another mystery.

The angle of the sun on our visit made photographing this tablet impossible, but you can see photos on some of the other websites dedicated to this mysterious, and controversial, monument.

Monumental Instructions for the Post-Apocalypse

We simply enjoyed a beautiful motorcycle ride through rural Georgia that involved seeing a roadside oddity that someone placed here at great effort and expense, and we thought that was certainly worth the trip!

15 thoughts on “The Georgia Guidestones”