After so many years living in, and then visiting, Texas, we finally made it to Palo Duro Canyon State Park on April 15th, in the Panhandle Plains just southeast of Amarillo.

Just a small portion of the canyon

Palo Duro (Spanish for “hard wood”), known as the “Grand Canyon of Texas”, is the second largest canyon in North America, and measures approximately 120 miles in length, up to 20 miles wide, and 600 to 800 feet in depth. It is bizarre, driving along in the plains, to come upon the canyon edge almost suddenly, with only a few small state park signs as a warning. The canyon was formed less than a million years ago when an ancient river first carved its way through the high plains. The erosion exposed a geologic story that began over 250 million years ago; layers upon layers of magnificent color and texture to explore. Archeologists have found evidence of human habitation that goes back over 12,000 years and suggests populations rising and waning as the climate varied from abundant rain to dreadfully severe drought. When we visited, there had not been notable rain since September of 2017. 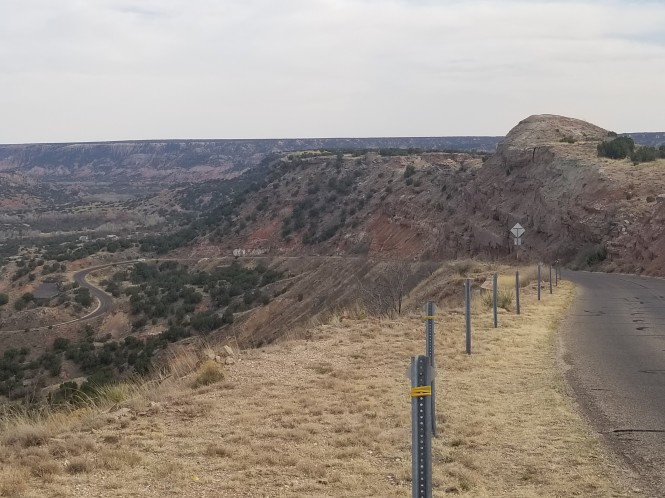 Dry as a bone, and under a burn ban

The canyon was home to the Kiowa, Comanche, and Cheyenne for generations, until the 4th U.S. Calvary descended into the canyon and attacked their encampments at dawn on September 24, 1874. This raid was the final battle of the Red River War. The people fled up the canyon, and the cavalry pursued briefly, then returned to burn the encampments and winter food stores. Of the herd of 1400 native horses, the Colonel kept enough for his troops and ordered the remaining 1,100 healthy horses shot the next day. Facing the coming winter without food or horses meant sure starvation, so the tribes were forced on foot to reservations, destroying their traditional way of life forever. The U.S. government’s current mistreatment of minorities is not at all new, sadly.

Palo Duro Canyon State Park now consists of 27,173 acres, and the original parkland was deeded by private owners in 1933. Deep in the depression, as part of Roosevelt’s New Deal, the Civilian Conservation Corps (CCC) sent seven companies of young men and military veterans to develop road access into the canyon, and build the visitor center, cabins, shelters, bridges, trails and the park headquarters. Although the CCC force would remain for four more years to complete the work, the park opened to the public on July 4, 1934. 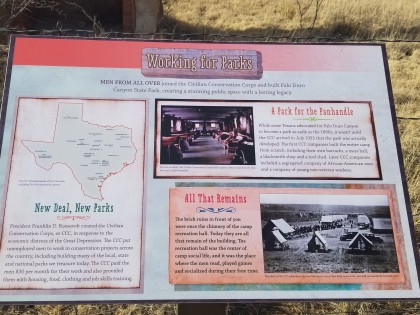 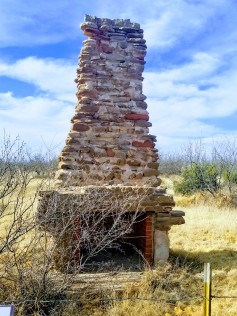 A visitor favorite, these magnificent longhorns inhabit a field near the park entrance. They are descended from longhorn cattle brought to the U.S. by Spaniards in the late 1500’s when they came to what is now Texas. The State created an official state longhorn herd in 1941 to ensure the preservation of the species, and now several live in various state parks including Palo Duro. 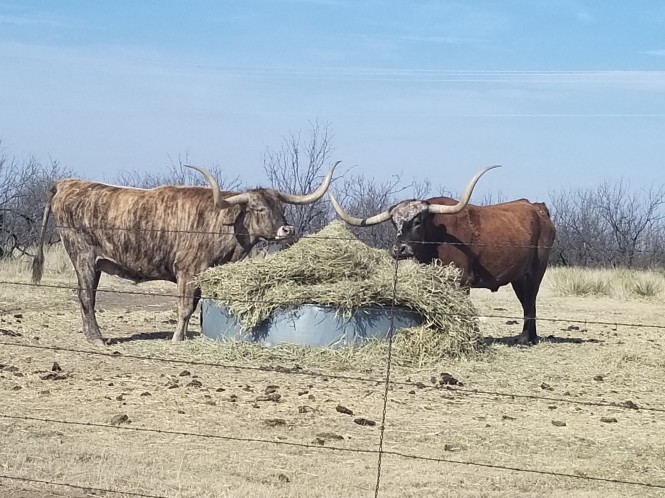 We arrived by lunchtime and set up quickly in the Sagebrush Campground in order to get out on the hiking trail right away.  Palo Duro Canyon State Park facilities include everything from the more primitive backpack or drive in tent camping, to equestrian camping, to RV sites with water and electric hookups, accommodating almost any size rig, and a handful of cabins on the rim or canyon floor.

Our site in Sagebrush just before sunset

But, I’m getting ahead of myself. The first hike we wanted to try was the Lighthouse Trail, the most popular trail in the park because it leads to the iconic Lighthouse rock formation, the symbol of Palo Duro. This trail was described as moderate, 2.72 miles each way, and there were warnings everywhere to carry lots of water due to the fact that most heat-related injuries and deaths occur on this trail! Wow! We each had full sun protection, 2 liters of water, and a pair of walking sticks, so off we went.

Most of the trail was rolling terrain, with many dry washes to keep you on your toes, but definitely not strenuous. We enjoyed seeing the variety of folks and pets, and hiking outfits, on the trail on this busy Sunday. Sorry, no photos of the wild outfits. 😉 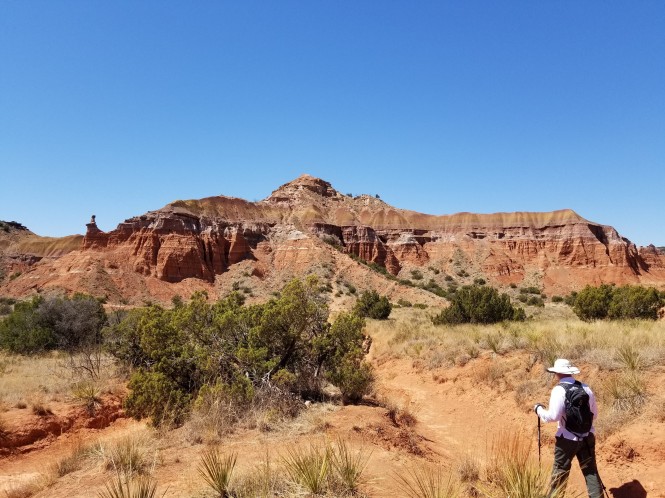 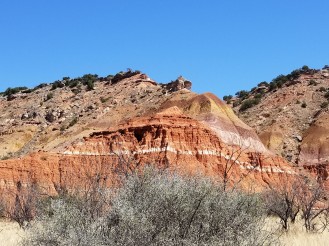 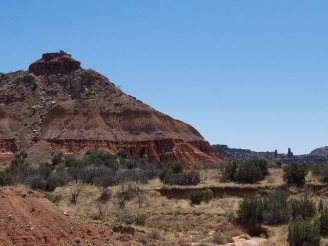 Our first distant view of the Lighthouse

Once we got to the base of the rock formation, there was a mountain goat climb to reach the Lighthouse. We really appreciated our walking sticks on the climb up, and especially, coming back down. At this point, we realized we were at about 2600 feet in elevation on the canyon floor, and about 3000 feet at the Lighthouse…who knew? 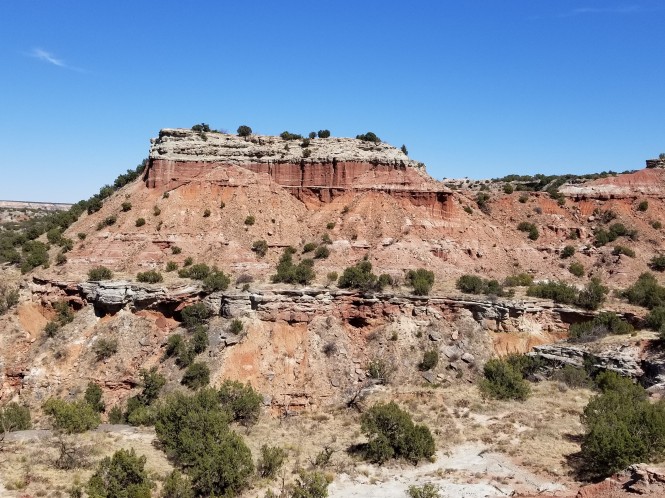 Looking back across the canyon floor

After scrambling back down, we took a look back up at the Lighthouse (right) and its partner formation from the canyon floor. They look so small!

A few more views on the hike back included stunning layers of color and erosion-created hoodoos, silhouetted against a magnificent blue sky. 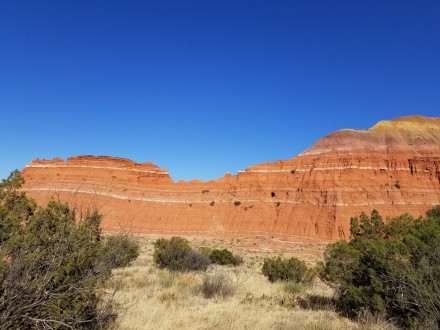 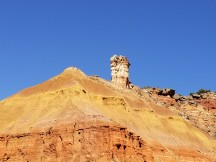 We wrapped up the hike after 2 1/2 hours and a total of 6 miles on the hiking app, tired but happy. We drove the canyon floor road and experienced a few more interesting sights before retiring to the coach. The “Big Cave”, purple sage, and the sun setting in the canyon. 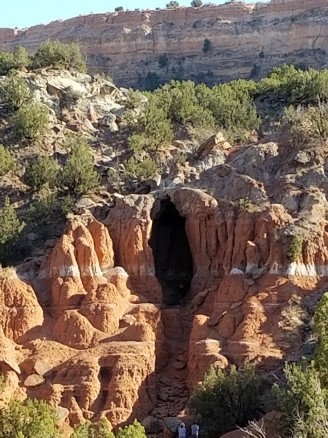 The next morning, we had a less definite plan for hiking but began with a trail called the Rock Garden, intending to just poke around the trail through an ancient landslide. It was listed as difficult but was one of only a few trails to take the hiker to the top of the canyon walls, so we started up. It was a steady climb, around and through giant scattered boulders, and at one mile we decided to go all the way up. 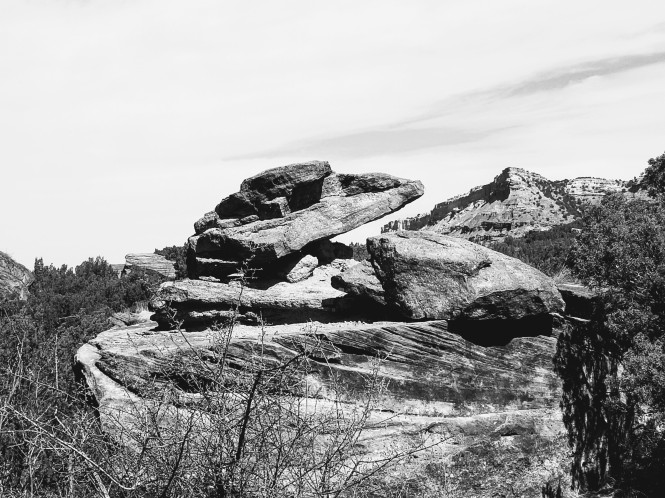 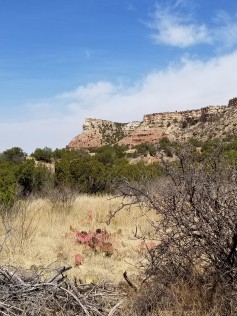 We enjoyed the views as we climbed, as well as a fairly brisk wind as we got closer to the canyon rim. Once at the rim, we connected with the Rylander Fortress Cliff trail and followed it to the first scenic overlook. The wind was mindblowing! We were busy corraling our hats, shirts, and backpacks as we rested on the edge but managed to get a few shots of the view. 🙂 We also took a video, but the noise of the wind proved deafening.

Looking east from the canyon rim

On the way back down, we encountered a mountain biker. We were impressed that he had tackled this fairly steep, rocky trail, and then we saw him on the rim, where he proceeded to take a major shortcut off the edge and catch up with us in no time! He did admit that it was tougher and looser than he thought! Ha! 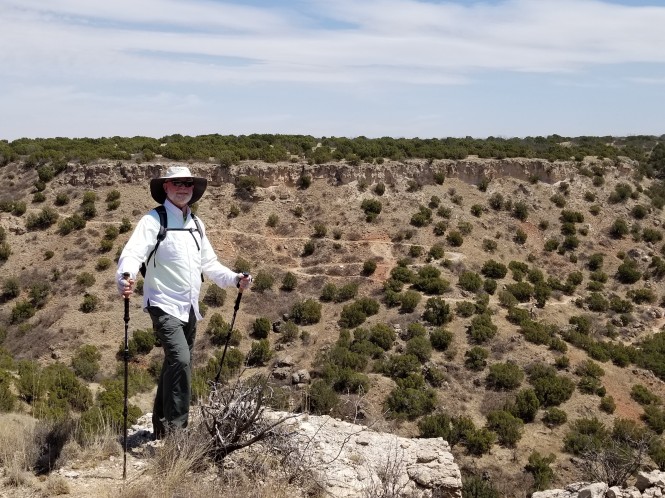 Jerry modeling the trail we hiked 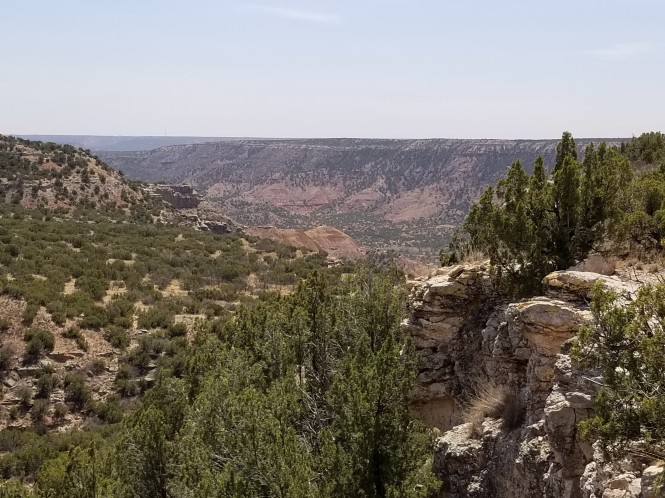 A portion of the cliffside trail

These were some serious boulders! And I have to admit to being affected by the heat, despite drinking a full two liters of water, during the hike down. In all, we hiked for 5.63 miles, going from 2638 to 3314 feet in elevation, over 4 hours. Whew! We rewarded ourselves with lunch at the trading post, where we encountered one of the wilder park patrons in the parking lot. 🙂 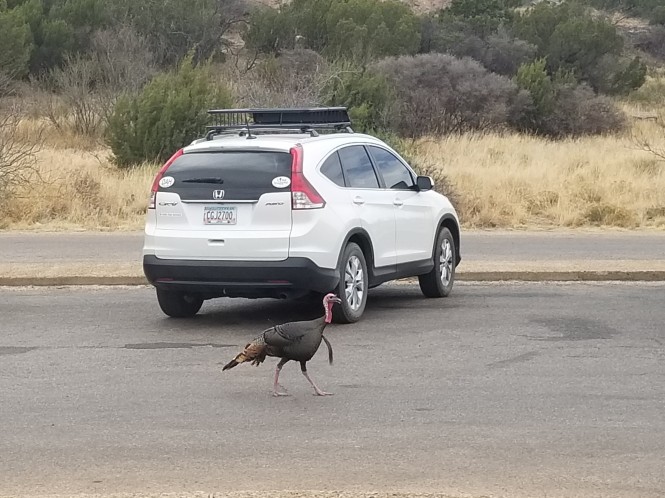 Following lunch, we took a ride up to the canyon rim near the park entrance, toured the visitor’s center,  and took a few shots of the canyon from another perspective. Simply gorgeous!

The CCC-built visitor’s center is on the right 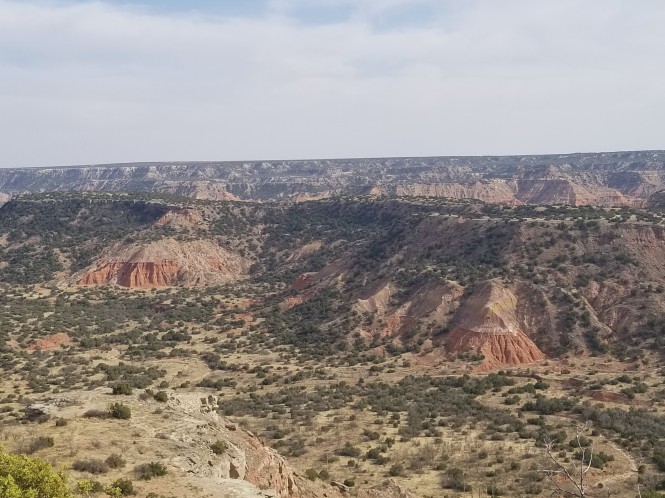 The orange rock formations are known as Spanish Skirts, how perfect!

We spent our last day in Palo Duro touring the fantastic Panhandle-Plains Historical Museum in the nearby town of Canyon, but suffice it to say there was far too much to see there to document that visit. One quote from the museum stuck with me after learning the history of this wild and challenging environment that I will share with you:

It is a lonely land because of its immensity, but it lacks nothing for those who enjoy Nature in her full grandeur. The colors of the skies, of the hills, the rocks, the birds and the flowers, are soothing to the most troubled heart. It is loneliness without despair. The whole world seems to be there, full of promise and gladness”  -Fabiola Cabeza de Baca, 1954

If you have any interest in the settling of the wild west, I would recommend you make your way to the area and see it for yourself! That evening we enjoyed a fun visit with the brother of a good friend from home, who happens to work at the West Texas A&M University in Canyon. He had shared tips regarding visiting Palo Duro via email, so we spent the evening discussing our park experience, as well as, learning about his charmed life running a university recreation department. 🙂