As many of you know, the love of my life, Jerry, has an early August birthday. Well, being here in paradise, the options for celebrating his birthday were absolutely endless. So, when asked what he wanted to do, he said he had read about an annual event the BMW Motorcycle Club of Colorado organizes which happened to be on his birthday. It was a fun-filled day of riding, which is reportedly only geographically possible in this part of Colorado, where you ride at least TEN 10,000 foot or higher passes in a single day! Well, if that is what the birthday boy wants to kick off his birthday month, that is what he gets! 🙂

We signed up in advance, made hotel reservations in Denver, where the ride commences and ends with a celebration dinner, and that was that! How did we prepare, you ask? Well…to be honest, we didn’t. Other than our usual hiking and much shorter bike rides, preparation consisted of packing our stuff and heading to Denver the night before the big event. And then we celebrated Jerry’s pre-birthday at our favorite local Mexican restaurant in Denver, La Cocinita, with margaritas, of course.

The birthday boy, hydrating before the big ride 🙂

We did get a great night’s sleep, and bright and early we headed for the check-in and continental breakfast at ride sponsor Foothills BMW in Lakewood. The ride route is not disclosed until the morning of the ride, so we looked it over and decided to follow the paper version, rather than put in all the GPS coordinates. Why make things too easy? 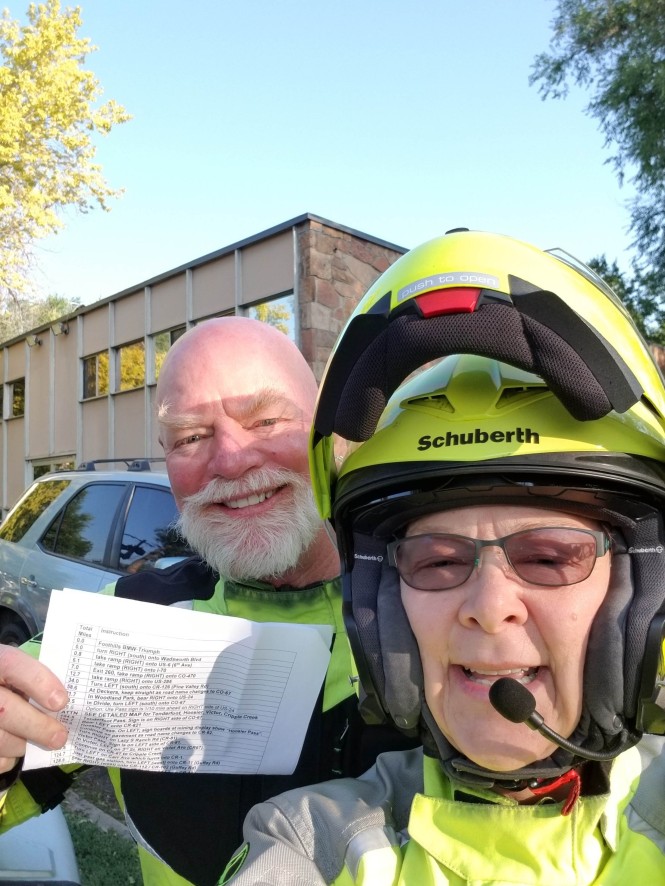 Being new at this, we carefully followed the directions and enjoyed leaving Denver metro and getting into the foothills. We had been on some of the roads on previous rides, but some, like CR 126, Pine Valley Road, which heads south from US 285 at Pine Junction, were twisty curvy delightful surprises! Needless to say, we really enjoyed the ride, heading through beautiful Woodland Park on US 24, then south at Divide to CO 67.

Then, OOPS, we missed the optional (?) Ute pass. Oh well, we figured, there are tons more passes to go. Next was Tenderfoot Pass, and bingo, there was a sign for photo documentation. 😀

We were now in the mining area of Victor and Cripple Creek. The next pass, Hoosier, apparently had a sign at a mining display, but it wasn’t large enough to capture in a photo, so we kept going to another pull off and stopped for a photo. We met a couple of guys also on BMWs, and one happened to be the route master for the ride, Randy Bishop! Randy was kind enough to take a photo of Team Goebeler and shared it on the club’s Facebook page. Thanks, Randy!

The birthday boy isn’t in EVERY shot!

After Victor Pass, we rode through the historic mining towns of Victor and Cripple Creek, which seemed spoiled to me now that every historic building seems to be a casino. Oh well, I guess that appeals to some. It didn’t warrant any photos from this team. Actually, nothing warranted any photos other than the passes! That is highly uncharacteristic of one part of Team Goebeler…as regular readers will agree. But we were on a mission!

We made a stop in the cute little town of Guffey, where the Freshwater Bar and Grill provided a much needed Gatorade, and we would have loved to stay for the live music on the deck…but passes were calling.

Twenty-five miles later, the next pass, Current Creek Pass (elev 9,485′) did not have a sign, so we didn’t stop. Thirty miles or so later we turned back onto US 24, then joined US 285 again, to tackle Trout Creek Pass.

The birthday boy is back!

Fifteen miles later, we entered Buena Vista, one of our favorite small Colorado towns, and home of the entry to Cottonwood Pass, CO 306, the granddaddy of this route at 12,126 feet. Alas, Cottonwood Pass was being paved and was closed way before the top of the pass, so we cut our losses and headed back into town. This pass would not be bagged today. Now we were bummed about having missed Ute Pass way back when…

We had a wonderful brunch at the Evergreen Cafe in Buena Vista, fueling up for the rest of the ride. It was still early and we were feeling strong and optimistic about bagging the rest of the passes.

From Buena Vista, we headed north to Leadville, and right on through this historic mining town where we rode our e-bikes on the Mineral Belt Trail back in April on our month-long trip to Estes Park.

We continued north on CO 91 and bagged 11,318′ Fremont Pass! This was a new road for us, and wow, what spectacular scenery! Sorry I didn’t capture any of it other than the pass! 😉

We passed through the ski area of Copper Mountain, where Jerry and I rode snowmobiles for the first time together about 20 years ago, and after 35 miles or so, we got on I-70 toward Loveland Pass. Due to either mixed up directions or mixed up interpretation, we ended up riding Loveland Pass TWICE! That counts for 11,990 two times! 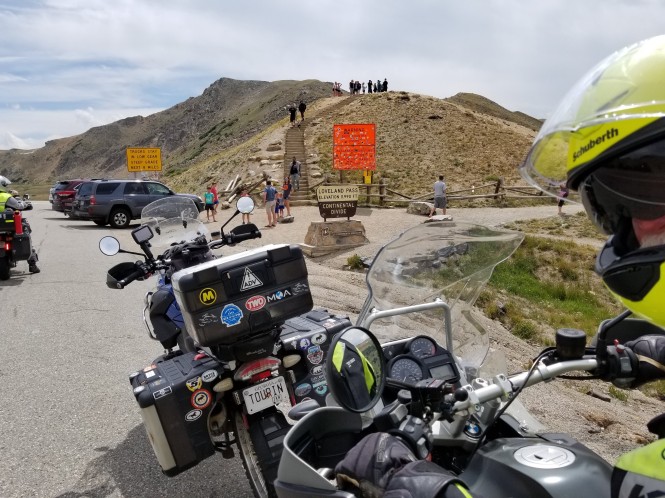 Then we hit I-70 again for about 30 miles and took the exit to try to find the sign for Floyd Hill, elev 7,920. We saw a sign, but it didn’t have elevation, so we kept going.

Thirty plus more slab miles, and we arrived at the Deer Creek Golf club in Littleton, location for the post-ride dinner and celebration. It was 4:30 PM and we felt accomplished, minus the miss of Ute Pass. We enjoyed the catered dinner and a cold craft beer while chatting with other riders. Despite it being SOMEONE’S birthday, no raffle prizes were awarded to Team Goebeler, but a really good time was had by all. We logged a total of 370 miles and 10 passes through incredible Colorado landscapes. Who can ask for more?