Back at the end of February while we were visiting Savannah, we followed up our morning visit to Historic Wormsloe plantation with a trek out to Fort Pulaski National Monument, on US 80 between Savannah and Tybee Island. There must have been some sort of special weather pattern while we were there because the fog or marine layer was really pronounced, especially when near the marsh, rivers, or ocean. You will see what I mean in all the photos!

With Jerry’s handy-dandy America the Beautiful Senior pass, we decided to go visit the Fort despite the fog, and we were glad we did. We stopped at the visitors center first, to catch the short historical video, and again, we were glad we did. The film gave us a chance to see the structure more clearly, as well as, learn about the Fort’s long building process and short life as a Confederate holding in the Civil War.

Construction began in 1829 on marshy Cockspur Island to guard the river approaches to Savannah. The Island splits the South and North channels of the Savannah River, so it was the perfect place to deflect attacks on the city. The Fort was named for Count Casimir Pulaski, the Polish hero of the American Revolution who lost his life in the unsuccessful siege of Savannah in 1779 and designed as part of a coastal fortification system adopted by President James Madison after the War of 1812. Construction took 18 long years, $1 Million, and 25 million bricks. As it turned out, by the end of 1860 it was still not completed or armed, and the US troops ended up having to conquer the fort before they could occupy it.

In 1861, two weeks after South Carolina seceded from the Union, and one week after Federal troops occupied Fort Sumter in Charleston, Georgia’s Governor ordered state militia to seize Fort Pulaski and preparation began to defend it after Georgia seceded in January 1861. By the end of April, 11 Southern states had left the Union and were at war with the United States. Before the end of the summer, President Lincoln ordered the Navy blockade of major Southern ports, which strangled the Confederate economy. In November a combined Army/Navy expedition struck in South Carolina about 15 miles north of Fort Pulaski, causing Confederate troops to flee, and allowing Union forces to establish operations for the whole southern Atlantic Coast on Hilton Head Island. By the 10th of November, the Confederates also abandoned Tybee Island, unknowingly giving the Federals the only site from which Fort Pulaski could be taken, despite its reputation for being “invincible” to attack.

The Federal forces had erected 11 artillery batteries along the northwest shore of Tybee Island, and in April 1862 demanded the Confederates surrender; upon their refusal, the Federals opened fire. The Confederates weren’t particularly worried, but they were unaware of the fact that the Federal armament included 10 new experimental rifled cannons, whose projectiles began to bore through Pulaski’s walls with a terrible impact. Confederate Commander Olmstead, concerned about the explosive shells passing through the holes and threatening the main powder magazine, and his men’s lives, surrendered only 30 hours after the bombardment began. The Confederate troops only returned to Fort Pulaski as prisoners after their surrender. The Island was made a National Monument in 1924, and restoration began in 1933 after a long abandonment. The restoration continues to this day due to the harsh weather conditions on the coast.

I promise, there is a fort beyond the moat and demilune, designed to protect the rear of the fort

The Southwest Bastion, visible from the approach bridge 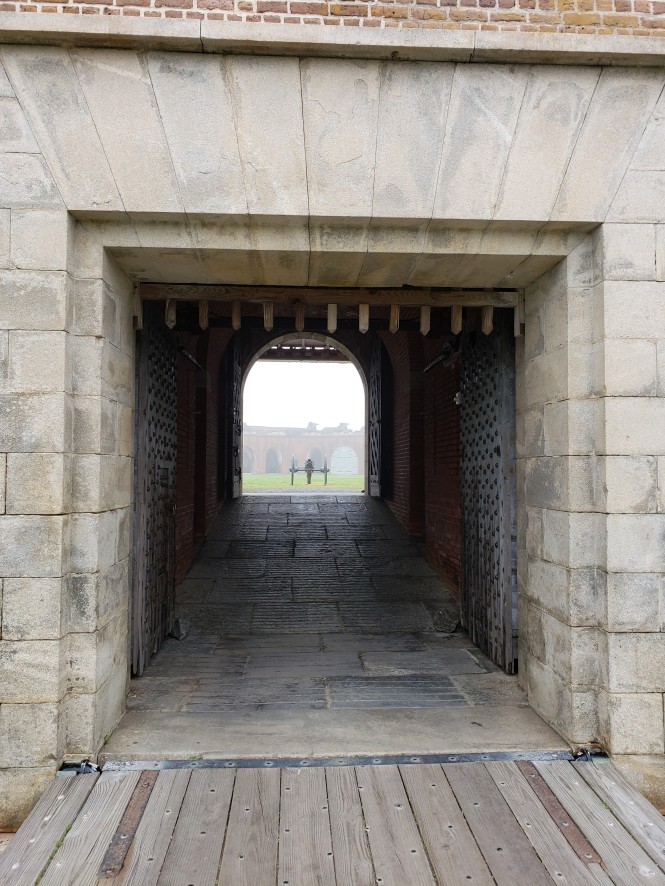 The main entry into the rear of the fort, over a drawbridge

The main parade ground in the center of the fort

The Northwest Magazine, whose 40,000 lbs of gunpowder at risk caused the surrender of the fort 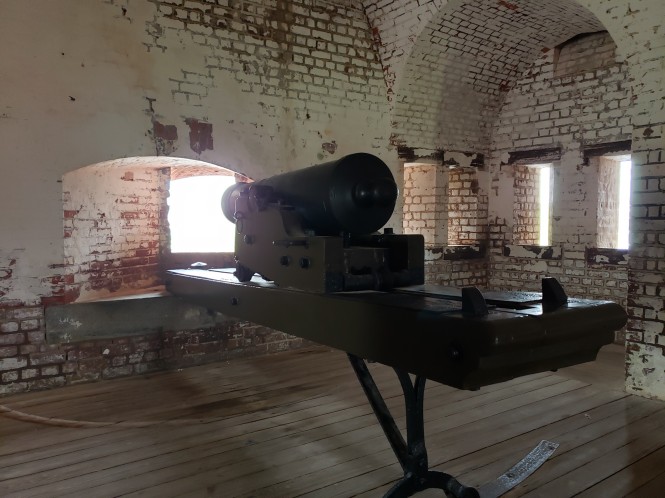 Cannon mounted on top of the fort facing north

My travel buddy modeling the latest in cannon and fog

And last, but not least, the main entry portal, this time looking out from the fort, flanked by the incredible doors that shut out the enemy once the drawbridge was raised. 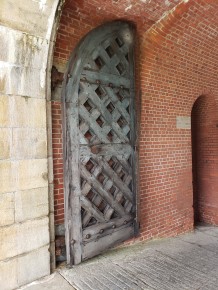 It was sobering to think of the fort when it was in active military use. During the Confederate stay, there were 385 men, and Federal forces reached a peak of 1,100, all in the space of a small city park. Today the fort stands as a memorial to those that participated in its construction and defense, but also as a reminder that nothing is truly invincible.