Welcome to the fourth installment of the Bucket List: Alaska series. If you are just joining us, you can go back to read the start of our Alaska adventure in Anchorage here. There will be links at the bottom of each post to take you to the next one.

The next morning, we were scheduled to take a Natural History bus tour into Denali National Park and Preserve. We met our guide, Jenn, and her trusty school-bus-turned-tour-bus, in front of the main lodge.

It is important to understand that Denali includes six million acres. Six MILLION. I have a difficult time even contemplating just how big six million acres might be. To access this enormous area, there is one entrance at the east end of the park, off Alaska Highway 3, and one 92-mile mostly dirt and gravel road that crosses the park from east to west. In the summer, private vehicles may drive the first 15 miles to Savage River, but travel beyond this point requires either a shuttle bus or tour bus.

We were automatically booked for the half-day Natural History (NH) bus tour through our land tour package with Princess. This caused some consternation on our part since we didn’t know that a full-day, Tundra Wilderness (TW) tour was available as an option. Of course, by the time we found out and asked, all the longer tours were full. The NH tour travels 30 miles into the park and is guided by a trained naturalist, as is the TW tour, but the longer tour covers 62 miles and has a much higher chance of seeing lots of wildlife. And more scenery, of course. 😦

We shook it off and settled into the NH tour with Jenn who revealed during her narrative that 2017 was her 27th season as a naturalist in Denali!!! Someone asked her where she called home and she said she WAS home. Her winters are spent exploring other areas, but Denali is home. Amazing. 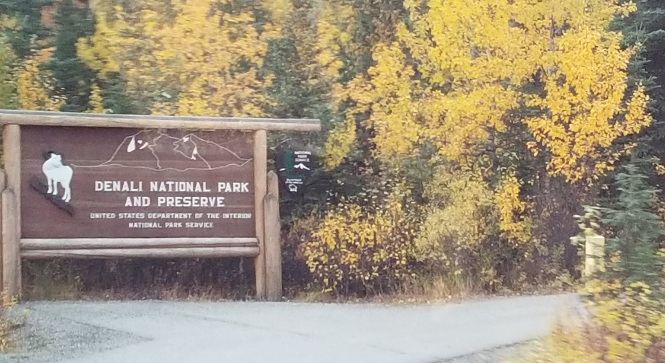 We had some excitement prior to the first stop when a sharp-eyed guest spotted a bull moose and two cows off to the north side of the road! Jenn had prepped us to shout out what we had spotted and where prior to our entry into the park, so when alerted, she quickly pulled to the side of the road for photos. They are grainy due to the extreme distance and zoom, but they are moose nonetheless! Score! 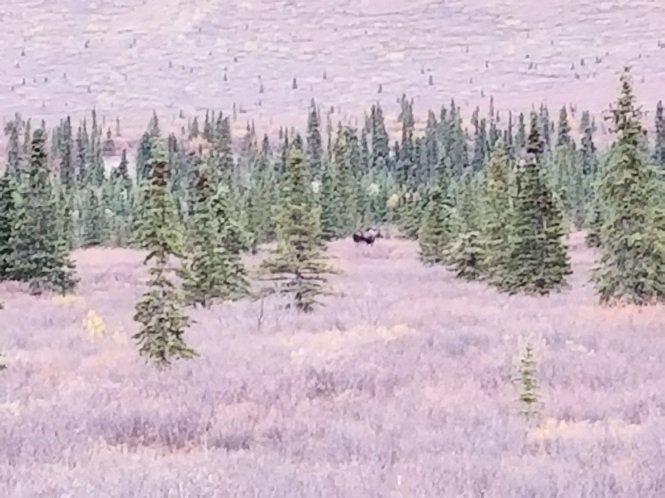 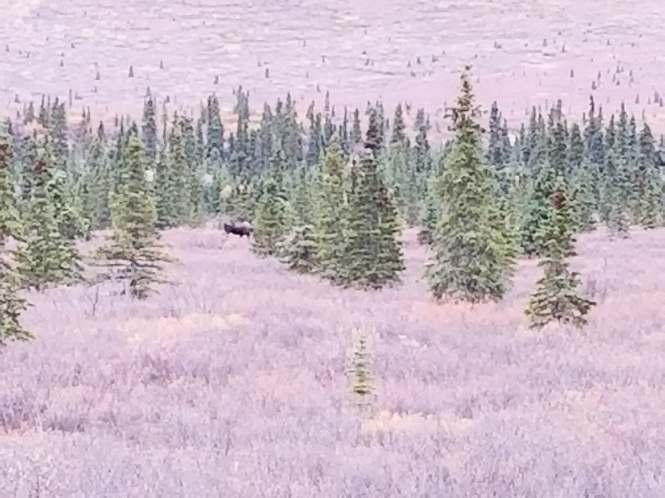 Several interpretive stops enhance the tour experience, with an hour of off-bus activities. Beginning with a stop at the Savage Cabin, the original ranger’s cabin provides a living history into how the cabin was once used and how it continues to be used today. Angela, the historian from Nenana, was incredibly enthusiastic about explaining what early ranger life was like in Denali.

Inside the Savage Cabin

After the visit to Savage Cabin and brief hike, Jenn took us to the farthest point on this tour, at mile 30, the Teklanika River Rest Area. This is an overlook with expansive views of the glacially braided Teklanika River. 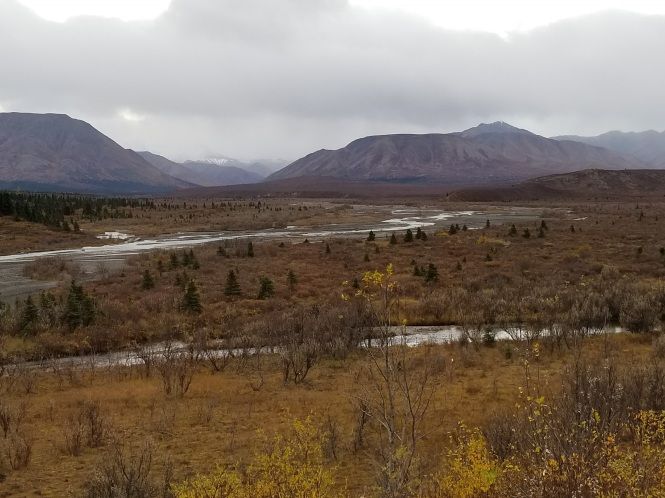 The Teklanika River with hovering clouds

Fall color on the tundra and magical cloud formations

At this point, we headed back toward the park entrance. There was SO much more to be seen, which just points out the drawback of an organized tour. Note taken. 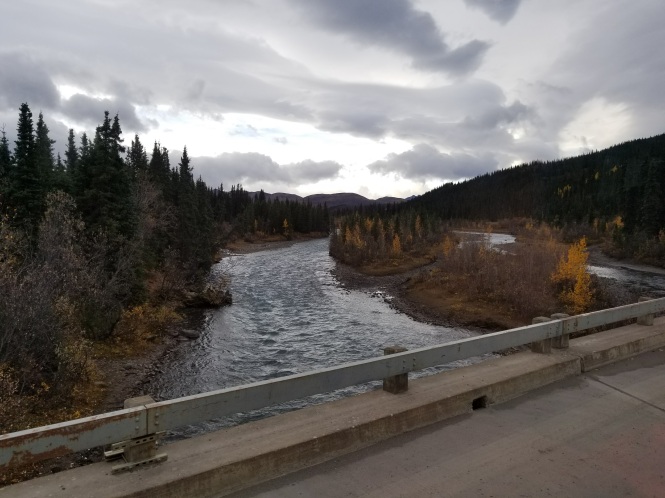 Passing over the Sanctuary River

Our next stop was at Primrose Ridge, also known as Mt. Margaret, which is an excellent place to see Dall sheep; unfortunately, we didn’t. The ridge rises 1,500 feet above the Park Road and consists mostly of dry tundra and rolling hills. I haven’t included video thus far in this series, but this stop requires it to give you an idea of September in Denali National Park. The link will open a YouTube window for a brief glimpse of Primrose Ridge.

While at this stop, we enjoyed an Alaskan Native presentation from a young Athabascan woman named Cheyenne that shed some light on how the land has been used by her ancestors for nearly 10,000 years. The Native Alaskans have such an incredible relationship with their surroundings, a reverence for nature, and an understanding that they must preserve it to ensure human survival. We could all benefit from internalizing such beliefs.

Additional sights from Denali during our Natural History tour, emphasizing the moody, cloudy, and chilly day. 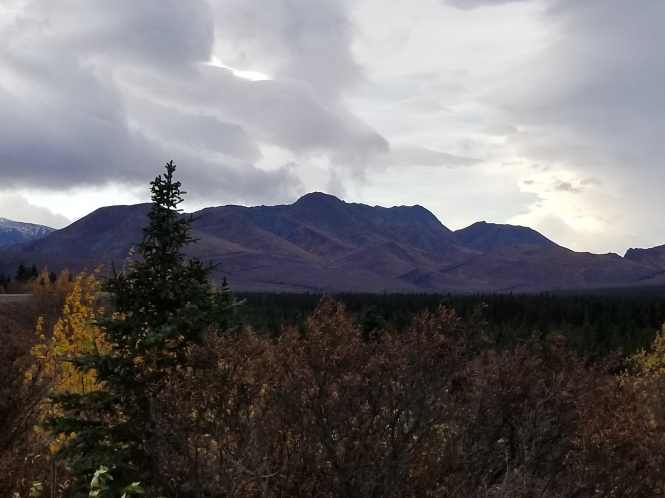 Looking east at the park road 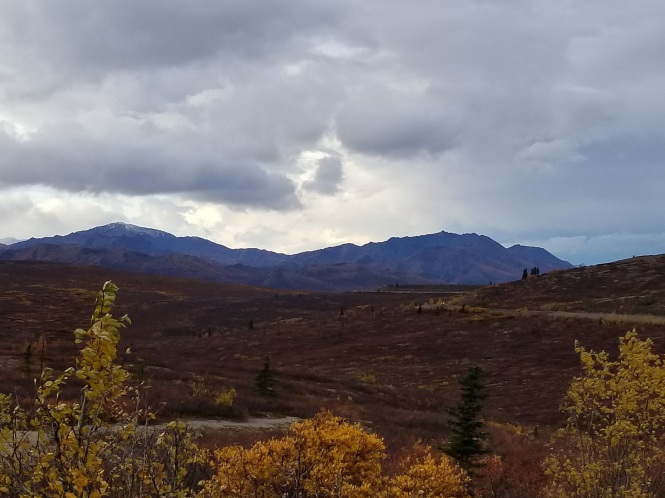 The view across the river valley

All in all, the Natural History tour was a fantastic experience. Jenn did a wonderful job of providing a great introduction to the landscape, geology, and history of Denali National Park, and thoroughly conveyed her deep love for this incredible National treasure. Oh, and on the way out of the park, she spotted an enormous bull moose high on a ridge probably a quarter of a mile from the road, and stopped so we could see. It was much too far to photograph using a camera phone, but I will never forget the sight of that magnificent animal, his giant antlers shining almost white in the sun, contrasted against the deep green forest. And in an instant, he was gone.

Next time, join me for a visit with the Denali sled dogs, and a wonderful opportunity to meet a fellow blogger face to face! You can go straight to that post at this link.

14 thoughts on “Denali National Park and Preserve – the tour”