Welcome back to the twelfth installment of the Bucket List: Alaska series. If you are just joining us, you can go back to read the start of our Alaska adventure in Anchorage at this link. There will be links at the bottom of each post to take you to the next one.

Overnight following our adventurous visit to Skagway, our cruise ship had sailed south through the Upper Lynn Canal, around Douglas Island, and then north via the Gastineau Channel to Juneau, Alaska’s Capital City. Juneau is one of two U.S. capitals (the other being Honolulu, Hawaii) that cannot be reached by road. Ferry service is available for vehicles, however, and the lack of a road network is due to the extremely rugged terrain surrounding the city. Though Juneau is at sea level, it is surrounded by mountains ranging from 3000 to 4000 feet high, and topped by the massive Juneau Icefield. Mendenhall Glacier, our focus for today’s post, is one of 30 glaciers that flow from this ice mass and is gradually retreating, having declined in both width and height.

We had originally not booked an excursion in Juneau, but the draw of seeing whales up close, and visiting a glacier that may not be here in the future convinced us to book an outing called “Alaska Whales and Mendenhall Glacier Trail”.

Upon the ship’s early arrival in Juneau, we could see thick fog hanging over the port, the city, and the mountains above. It was not looking too promising for viewing, well, anything. Despite the weather, we met our tour guide, Jordy, from Gastineau Guiding, at the appointed time of 8:15 AM. He explained that the marine layer was so low, there were no whale-watching boats going out in the morning, and that we could go to Mendenhall first, and if the weather cleared, we could do the boat trip later. Our tour group of about 15 people was on board with that plan. pun intended.

The bus ride to Mendenhall was just 12 miles from downtown Juneau, but a world away as we left the city and entered the natural area of the Tongass National Forest, whose 17 million acres encompass the glacier and actually, much of Southeast Alaska. Mendenhall is the only glacier in Southeast Alaska that is accessible by road, and thus also the most visited. It was definitely the most crowded of the natural wonders we had seen thus far, especially at the visitor’s center and on the main trails to the overlooks.

Jordy and his compadre had things under control, dividing the group into energetic and not so energetic sub-groups, and then Jordy steered the energetic group to the path less traveled. 😉  Really, he selected a roundabout way through a fascinating mossy forest,  with giant boulders strewn like marbles, where any minute you expected to see an elf or fairy appear!

There were spider webs all over the place, and we even saw several with artists in residence…spiders in the act of creation, though I did not get a viable photo of one.

And then we arrived at the edge of Mendenhall Lake. It was simply magical in the mist! 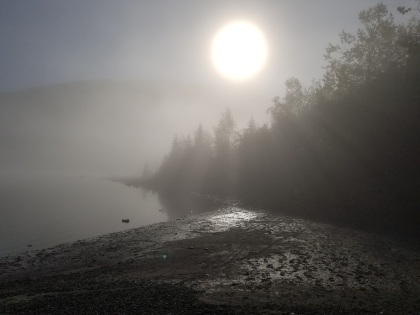 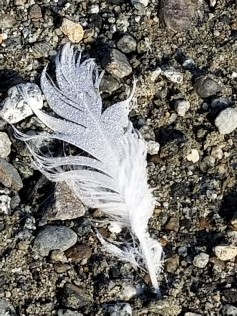 A lone white feather on the rocky beach

Jordy snagged a tiny iceberg from the lake and we were able to admire the crystal clear fragment up close.

And then the glacier appeared through the mist…

This was a sign of clearing, right??? Jordy disappeared to check in with his office, find out the status of whale watching, and determine our next steps. We scavenged on the beach, admired the misty lake, and squinted to see the glacier, mountains, and waterfall across the lake until his return. He had bad news about the whale watching: no boats were going out today. We had two choices, take a shuttle back to the dock after this tour, or extend the tour around the lake to the base of Nugget Falls, which is as close as you can get to the face of the glacier without a major hike. A few folks chose the shuttle, but the rest of us were up for the long hike to the falls. We met the bus near the Visitor’s center and those choosing to go back to Juneau departed.

The hike around the lake was partially paved, partially elevated walkways over the wetlands, and then gravel. The air was incredibly fresh and the scenery was amazing.

Walking over the wetlands 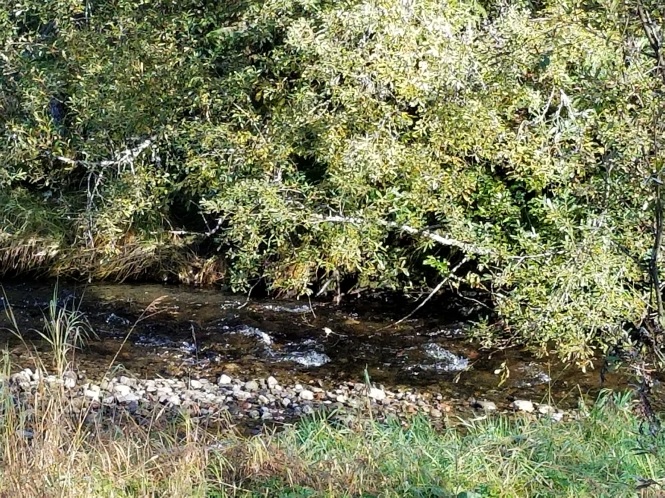 A salmon stream below the lake 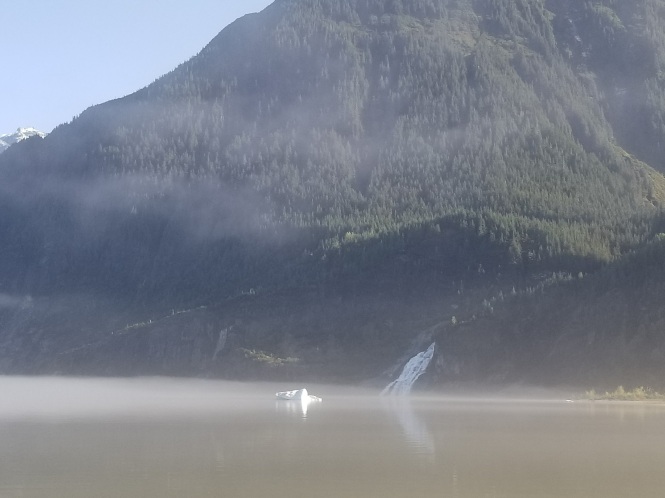 Nugget Falls and a larger iceberg, across the lake

A view of the glacier from an overlook on the way to Nugget Falls, the fog nearly cleared, the color enhanced

And then we arrived at the end of the trail, now on the beach of the lake again, in front of Nugget Falls, and as close as we would get to Mendenhall Glacier. At this point, we were to the side of the glacier face, but it was still impressive. 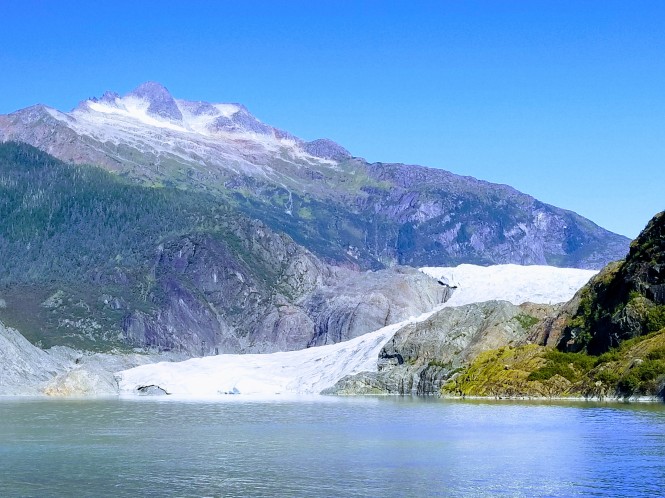 I must admit to a color touch-up here, the scene is too gorgeous to be drab!

And then the star of this hike, Nugget Falls. In the picture I took earlier, from across the lake, you cannot even imagine the force and volume of this waterfall! Up close it was truly breathtaking!

Nugget Falls in all its glory, a drop of 377 feet

Nugget Falls and the glacier

Looking back towards where we started the hike around the lake

We reluctantly started our hike back to the bus after an hour or so of beachcombing, marveling over the waterfall and glacier, and learning about Jordy’s hiking adventures to the far reaches of the National Forest. But all the amazing sights were NOT over! As we approached the parking lot, we saw several park rangers and visitors gathered along the entrance road. We neared the group and learned that a Mama black bear and THREE cubs were in the wetlands, and the rangers expected her to cross close by. The Rangers kept the visitors at a respectful distance, and to reward our quiet and patience, we were treated to this:

Including three photos is probably overkill, but it helps me get across to you just how EXCITED I was to see these guys!!! It was the highlight of the day, and possibly the week! ❤

That evening, we relaxed in the hot tub, chilled on deck as the ship departed Juneau, and then watched an incredible sunset prior to a lovely crab leg dinner in the Portofino restaurant with our friends. What a day!

Patched pano of the aft deck and pool 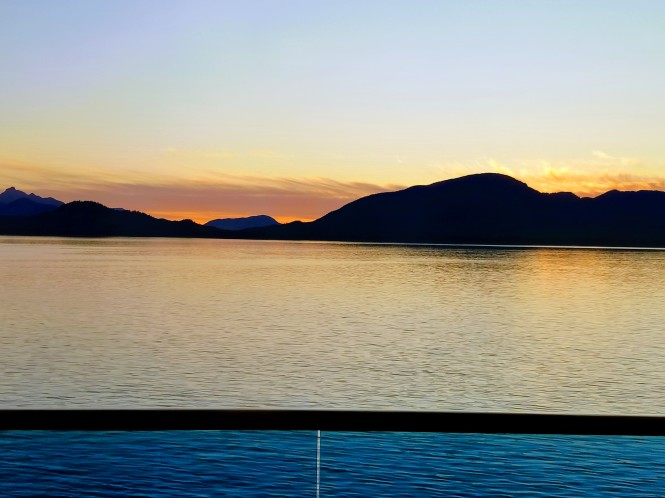 I hope this leaves you with dreams of glaciers, waterfalls, and bears dancing through your head! One more Alaska post, then a stop in Vancouver and this tale is done.

Thanks for coming along!

You can go directly to the next post by following this link.