If you are just joining us, you can go back and read part 1 first, if you like.

For Day 2, our plans were to relax around the hotel, then venture to the eastern end of the Island, to Fajardo, for an evening water adventure.

I started the day with an early walk on the beach, as I had discovered that the sun was already blistering by 8:30 AM. This was a surprise on my walk; a cemetery, located right above the beach dune line. 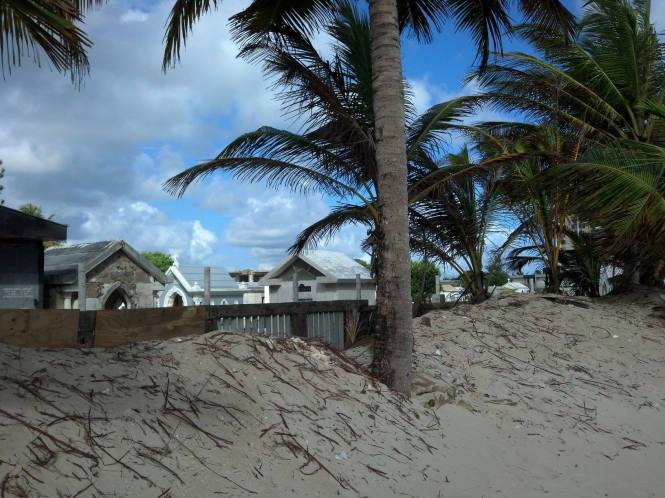 After my walk, L and I met for yoga by the ancient Banyan tree. It was a wonderful sensation, engaging in this activity that I love, while outdoors in such a gorgeous setting. I felt so grateful for the opportunity to be in this place, while also saddened that G couldn’t be with us. The last pose in a yoga session is a resting pose; a time to focus on the breath, to reflect, and to integrate what you experienced during your practice. This isn’t a great picture, but it’s what savasana looks like under the banyan tree.

Looking up at the huge banyan tree

Following yoga, L and I headed for brunch on the open veranda. It was Saturday, and the newly arrived crowds of tourists gave the place a different vibe, but the people-watching was amazing. 😉

After brunch, we decided we would work on our next day’s itinerary, and then meet back at the pool later. During the days leading up to our trip in May, one of the activities we were all excited about was a visit to the Puerto Rican rain forest, known as El Yunque. Sadly, right before we arrived, El Yunque was closed due to damage from torrential rains that fell there, cutting off highways and unleashing mudslides. With the rain forest closure confirmed by our hotel concierge, Danny, we made plans for a catamaran snorkeling trip for the next day, our last full day on the island.

Some photos from around the hotel, which is very ornate with carved wood, incredible glass chandeliers and sculptures, and the lobby is THE place to be for locals and tourists alike on weekend nights:

Approaching the hotel from the street

The Blue Bar in the center of the lobby

Ceiling and chandelier in the hallway near the Casino 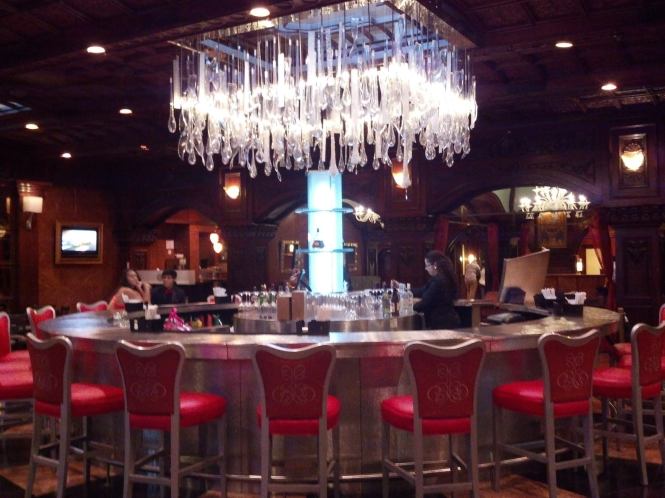 Another amazing glass piece, this is the Silver bar in the lobby

And now some shots from our poolside afternoon:

View of the pool bar from water level 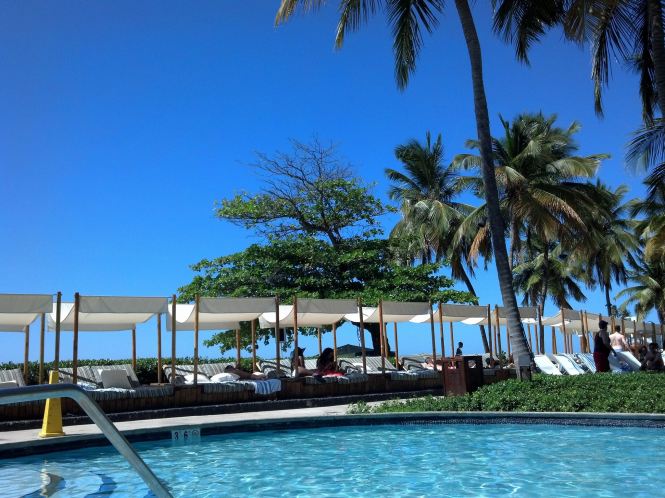 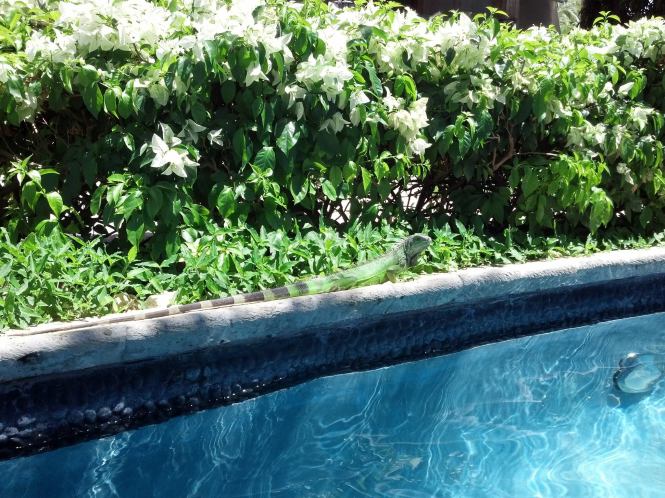 Hanging with our iguana buddy. This shot is not zoomed. He was that close.

L and I are both rather type A personalities, so we had some activity planned for each day. On day 2 we relaxed at the hotel because our activity for this day was an evening adventure. We had an early dinner and were in the lobby at 5 for our shuttle to Fajardo, for a bioluminescent bay kayak adventure.

Oops! When the shuttle arrived, it turned out we were not on the list for that trip. Our concierge buddy, Danny, got on the phone and discovered that we had been booked on the 7 PM shuttle, for an 8:30 kayak trip, despite all of us remembering booking the earlier trip. We were not pleased, but Danny arranged a credit of half of our kayak trip cost with the vendor, and provided a number of hotel drink tickets for use later. Ok, ok, we’ll wait till 7. 🙂

While we wait, let me share what bioluminescence means. In the perfect setting, such as sheltered bodies of deep salt water, rich with nutrients, tiny micro-organisms called dinoflagellates chemically react to disturbance in the water by emitting light, or glowing. There are only a handful of these perfect settings in the world, and Puerto Rico is blessed with three of these. We chose to visit Laguna Grande, which is accessed from the eastern town of Fajardo.

During the trip planning stages, G was least enthusiastic about the kayak options. She really did want to see the bioluminescent bay but the idea of getting in a kayak in the dark, paddling to another, even darker place, to see the bio bay was not too attractive to her. I can’t lie; I had my trepidations as well!

So, at 7 PM our shuttle arrived to take us kayaking. We had chosen the earlier trip originally since we would have at least gotten into the kayaks in the daylight, and gradually become accustomed to the dark. Not the case on this later trip.

On our shuttle were a couple about the same age as L and me, a young Indian couple on their first vacation following the arrival of their first child, and a group of young ladies in their twenties. We had a fun ride, chatting about our various activities since we had been in Puerto Rico, and anticipating our adventure.

We arrived at our destination, a van on the side of the road next to the water, in the dark. We signed our waivers by flashlight. We were briefed by the light of a lantern. We were told we would get wet. We all decided to leave our ever-present phones in the van. Thus there are no pictures of this momentous adventure.

The kayaks were all doubles, and each had a glow stick on the front and on the back of the kayak. ONE glow stick. And there were glow sticks on each of our life vests. This was to be our lighting. I have to admit I was getting tense. We loaded up and got our sea legs. It was comical. Kayaks going in every direction, not all in the direction we were headed. And of course, we were not the only group heading for Laguna Grande. L and I had both kayaked before, but were by no means experts. Ha. Following a guide, we made our way to the hidden entrance to Laguna Grande, in the middle of what looked like an impenetrable wall of mangrove trees.

The mangroves are thick and form a tunnel of trees for, oh I don’t know, an HOUR of paddling in the dark. Just kidding, it was probably more like 15 or 20 minutes, and approximately one mile. It was seriously dark, and there were kayaks from the earlier trips coming out of the lagoon toward us, as well as, a couple of electric powered skiffs, which offer less strenuous visits to the bio bay. There were moments that we were rammed by surrounded by other boats, and moments where I could see nothing but my own glow stick and the branches looming right over my head. L and I talked about how G would have HATED this. Whew.

Then we emerged into Laguna Grande and it was as if we had entered an altered state. The soft glow of moonlight on calm water, the mountains of El Yunque rainforest in the distance, it was so tranquil and open. Then we saw the phenomenon: as you dipped your paddle into the water, it was as if light was shooting from the paddle. The guide gathered us into a floating classroom, each kayak holding onto the other so we could hear him tell us about the science of the laguna, and of all the threats to this natural treasure caused by pollution and over-exposure. Puerto Rico is to be commended for taking steps to limit the volume of visitation that threatens this natural wonder. He informed us that the thick and scary mangroves we had paddled through are the major source of nutrients for the dinoflagellates, and the closed lagoon is the perfect incubator for these tiny glowing creatures. With the guide’s encouragement, we dipped our hands and feet and saw our skin glow in the water, giggling like kids. Now, L and I talked about how G would have LOVED this part.

Once educated, we took a paddling tour of the laguna, and this is when the magic happened for me. We paddled along close to the shore, and the shallow water was teeming with small fish, feeding on the bottom. As our kayaks glided through the water, the fish shot out in front of us, triggering the dinoflagellates, and appearing like a million shooting stars. It was absolutely enchanting!

All too soon, we headed back into that darned pitch-dark mangrove tunnel. Now we were paddling into a headwind, but at least there were no other kayaks or boats coming at us. I won’t lie; kayaking is serious exercise, especially when you can’t remember the last time you kayaked. But it was all good. We got back to shore, tired but happy. Some of our new friends had not eaten dinner, so our accommodating van driver, Tony, said he had a friend with a restaurant on the way, where we would stop. Well, this may be a phenomenon unique to Puerto Rico, but we stopped at something that looked like a cross between a roadside row of storage units, and a carnival! It was unbelievable, and it was packed with weekend-night revelers of all ages, shapes and sizes. Music and laughter mixed with the sounds of cars, motorcycles and scooters, and it was a wonderful chaos.

Some of us bought food, some of us bought festive beverages, but all of us were amused and entertained! Tony explained on the way back to the hotel that these types of venues were found all over Puerto Rico, and they housed everything from bars and restaurants, to discos, to shops, and they were typically only open on the weekends. And immensely popular, as we experienced!

Tomorrow (and I hope to really deliver tomorrow), will bring a photographic journey via catamaran, and the close of our girls’ getaway.