Wow, it felt good to finally get a blog post done! I was hoping to capture the momentum, finish this series, and get on to some more recent adventures, but here we are two months later. Well you know, time flies when you’re having fun! 😉

If you are interested in going back to the beginning of this series, you can start here, with the post about RVing ‘firsts’ and follow the links at the bottom of each post to read about the whole adventure…at least so far!

After Part 3, where we thoroughly enjoyed Cody Wyoming and the epic Beartooth and Chief Joseph scenic byways, we drove the RV directly to Billings Montana, just in time for the start of the BMW MOA (Motorcycle Owners of America) national rally. 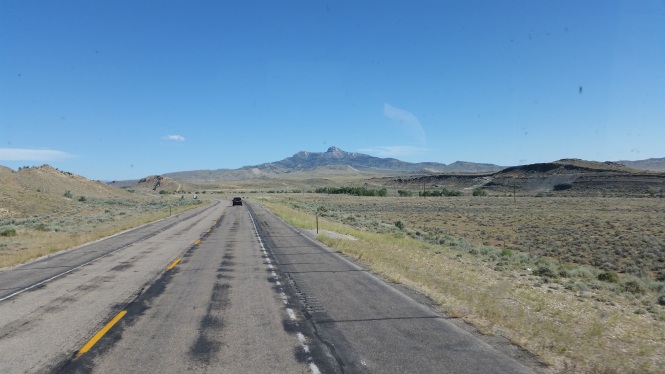 We don’t normally seek out larger cities in our travels, but the rally was being held at the Metrapark Fairgrounds, which was conveniently close to downtown Billings with its restaurants, breweries, and street fair for rally-goers to enjoy. A real bonus was that the Metrapark included RV parking on site, so we settled Koko into the RV parking lot on Wednesday afternoon, just in time for the GS Giant’s happy hour and trophy presentation. Dang, we have NO pictures of that fun event. 😦

We really didn’t take many photos at the rally at all, but we did take advantage of a geological feature of Billings, a towering bluff that just happened to have a view of the rally grounds! Take a look… 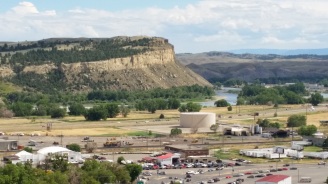 Another bluff towers over the Yellowstone River

We did have some fun at the rally, shopped the vendors a bit, enjoyed lunch downtown, and attended a street festival. Did a little riding to the Bighorns (Part 4), and watched some live music by the rally grounds lake. We did not, unfortunately, win any motorcycles or other grand prizes. Oh well…

The lake and metal art 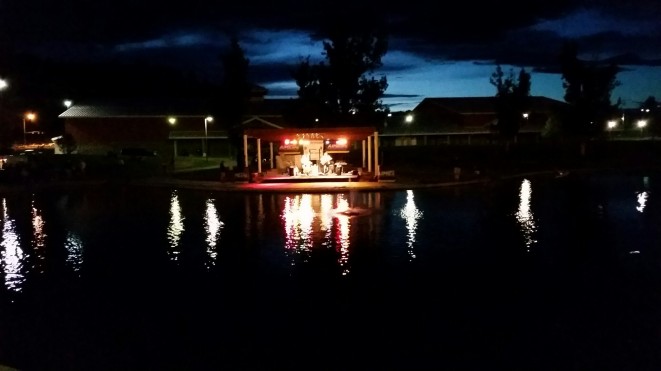 Watching live music and reflection on the lake

A really fun part of this particular MOA rally was the presence of friends John and Jeanae, who we met 6 years ago on a motorcycle trip to South Dakota. When we met, they were on a 3 month RV trip, towing their motorcycles, and we sought them out in a Mount Rushmore overlook parking lot, mostly because they had license plates that spelled a phrase when read together, and so did we. 🙂 Anyway, John and Jeanae brought their RV and bikes to Billings, and so did their friends Jim and Jill, with daughter Zoe. We visited while at the rally, but also planned to head to West Glacier together for a stay after the rally. This was our first planned RV and motorcycle outing with friends, so we were really excited! And we were going to Glacier, enough said.

The girls had a fun idea for the trip from Billings to Glacier…we would caravan out to Deer Lodge for lunch, and to celebrate Jim’s birthday, then the men would drive the RVs and the women would ride our bikes the scenic route to West Glacier. Don’t have to ask me twice!

Ain’t the west great??? Where in the east could you find a small town that could park three RV rigs pulling trailers? 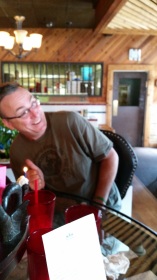 After lunch, bikes get unloaded, women get geared up, and off we go! To the gas station anyway…

The girls gassing up for the scenic ride

Meanwhile, this was Jerry’s view on the way to Glacier. Let’s face it, any road is scenic in Montana, even the interstate! 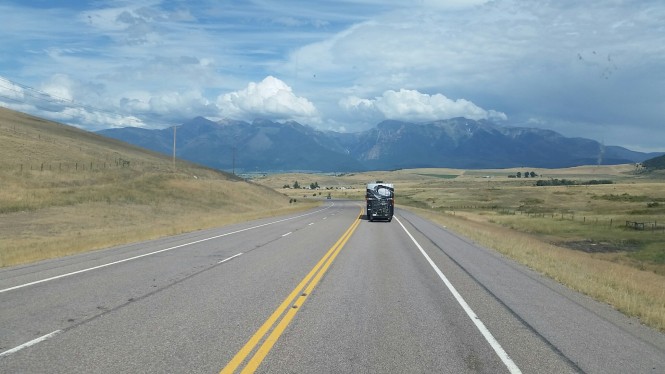 Anyway, Jeanae, Jill and I dropped off the Interstate on US 12 east a bit, connecting to MT 141, then 200, then 83 (all heading north or northwest) and stopped for a break and photo op at beautiful Seeley Lake. Enjoy… 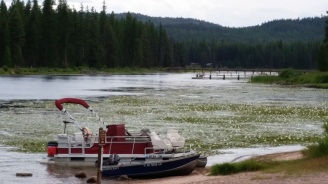 The scenery on the whole trip was awesome, forests, lakes, mountain views, but we really didn’t stop again after Seeley, except for a potty stop, prior to getting to Glacier. Most appropriately, this was at a roadside tavern called Liquid Louie’s. Heehee. And we had to buy a bottle of water to use the facilities!

I wish I had pictures, but the last stop we girls made before the campground was at a grocery store in Columbia Falls. It was hilarious, three women, shopping for 3 RV households, in full riding gear, and then loading it all onto 3 bikes. We were the hit of the parking lot! You’ll just have to imagine the hilarity…

The guys had already gotten the RVs settled into the beautiful West Glacier KOA, and we gathered at Jim and Jill’s site to continue celebrating Jim’s birthday with festive beverages, snacks, and a roaring campfire.

The next day, we all did our own thing during the day but met up for a hearty dinner at Oso’s Smokin’ BBQ, a Montana Mexican smokehouse, in the Tamarack Lodge just down the road from the KOA. It was an amazing mix of BBQ and Mexican food, and we all enjoyed it immensely.

I was going to include the whole Glacier experience in this post, but I have run on so long already that I will just include the fun we had while hanging with the group here.

The next day we all headed into the park despite overcast skies and low hanging clouds. 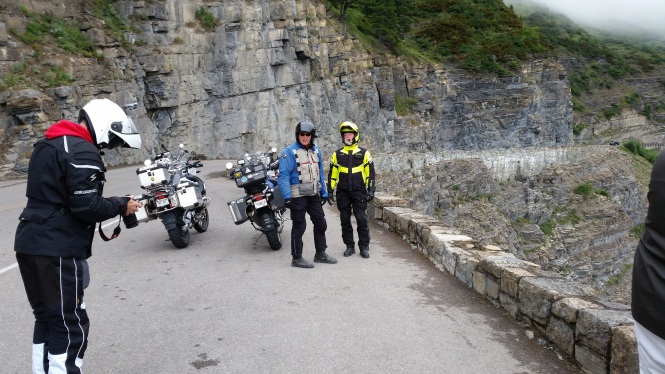 Exploring Going to the Sun road on a cloudy day

Mountains are always gorgeous, cloudy or not, and we ate up the views! We also visited Lake McDonald lodge and took pics of the bikes by the lake. Silly tourists, lol! 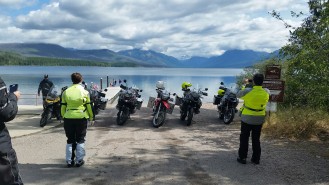 It was very cool to have three couples together, with all the women riding their own bike. You would think that would be more of the norm these days, but you’d be surprised how often I am the only woman riding her own bike when we ride with groups.  Hmmm.

After poking around in the park for a while, we ventured off-pavement to the historic Polebridge Mercantile, which has been serving the remote North Fork community for over 100 years. We shared giant sandwiches and huckleberry sweets, the latter which made Polebridge famous, before heading off to even more remote Bowman Lake. 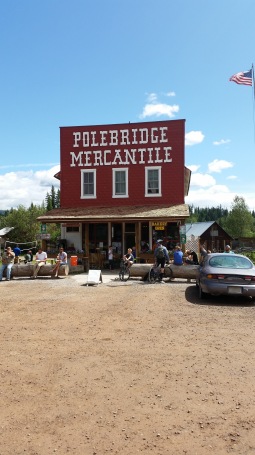 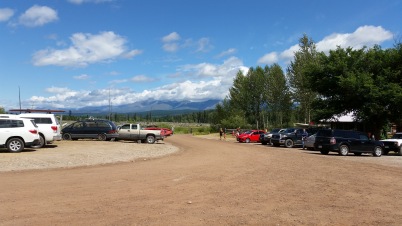 The view looking north from Polebridge 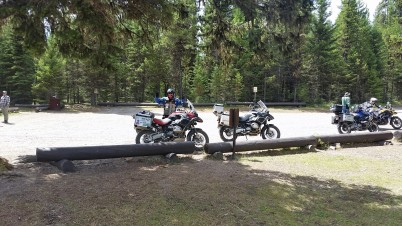 John with the bikes at Bowman

In the Bowman Lake campground

I’ll leave you with a shot of the North Fork of the Flathead River, where we parted ways with the group. 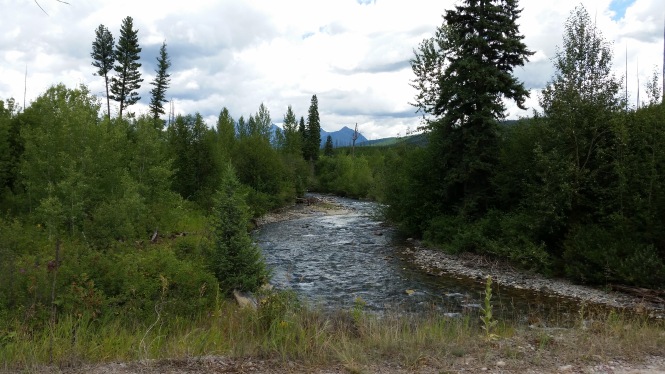 Jim and Jill headed back to the KOA, John and Jeanae headed further into the wilds to Kintla Lake, and we headed back into the main park for a few more photos, since the weather had cleared nicely. We really enjoyed our time with the other Motorcycling RVers, and hope that we have more adventures in the future. For now, we are keeping up on Facebook!

I will bring this post to a close, and  to the amazement of both author and audience, I have completed the final post in this series, you can view that here.