Despite a few visits into the eastern portion of Rocky that I shared on FaceBook and Instagram since we arrived in Estes Park in mid-May, this is the first blog post of 2019 about our beloved Rocky Mountain National Park.

The colder temperatures and spring snows that continued into May caused a delay in the opening of Trail Ridge Road (TRR) until June 5th this year. In contrast, TRR opened on May 24th in 2018. We had plans to fly back east to celebrate a family occasion on June 7th, so we weren’t able to drive Trail Ridge until June 11th. There was still plenty of snow to boggle the mind!

I wrote extensively about TRR last summer, and you can go back and read that series beginning with this link: 2018 Trail Ridge Road series. As a reminder, Trail Ridge Road is one of ten America’s Byways in Colorado and a national designated All American Road. It is the highest continuous motorway in the United States, with more than eight miles lying above 11,000′ and a maximum elevation of 12,183′.That said, I will provide locations and descriptions, but mostly let the photos do the talking for our visit on June 11. We had spent several visits at Rainbow Curve, the closure point during winter, so the photos begin just past there, with a view of Sundance Mountain. 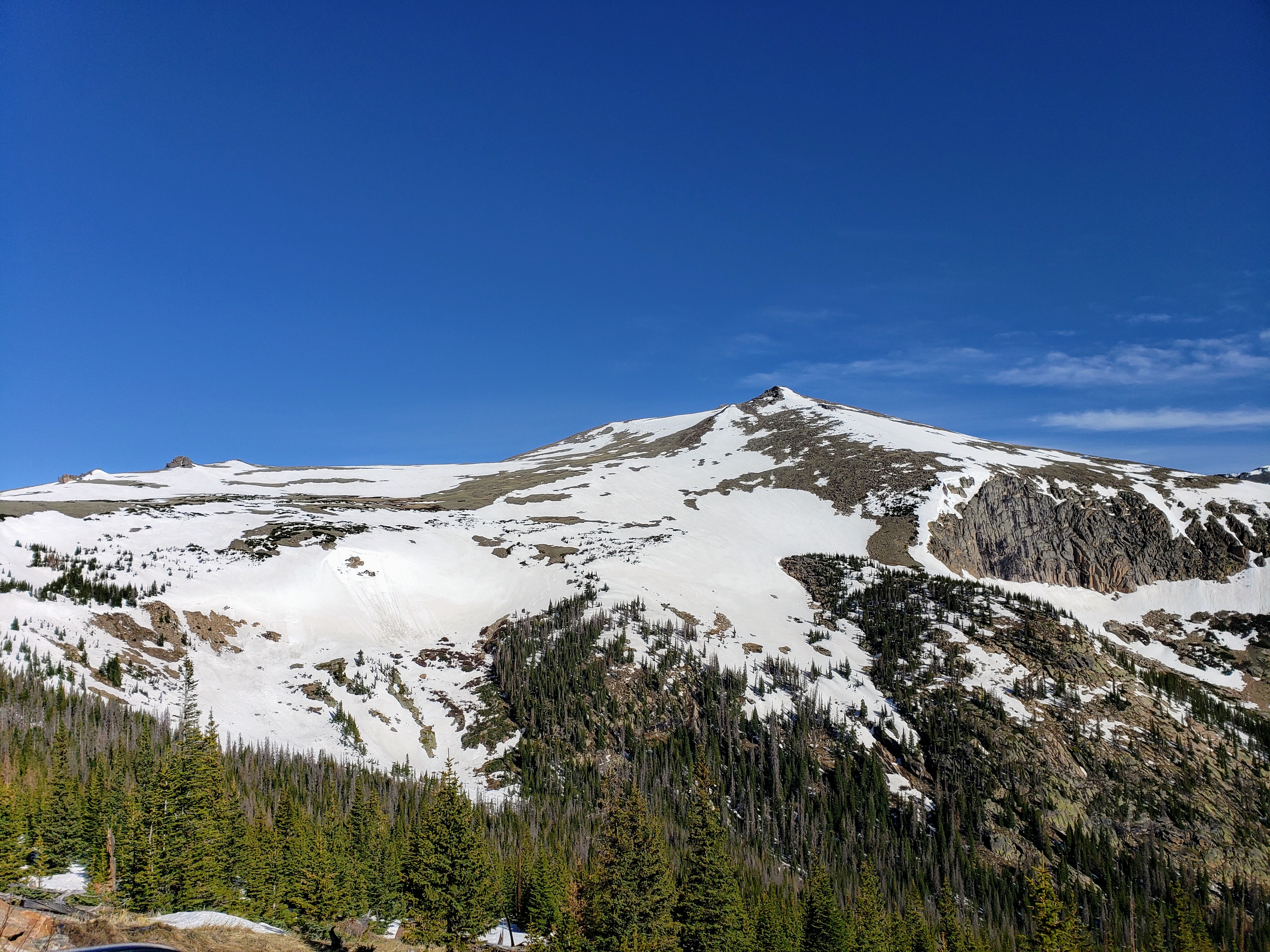 As we climbed in elevation, the snowbanks climbed as well… 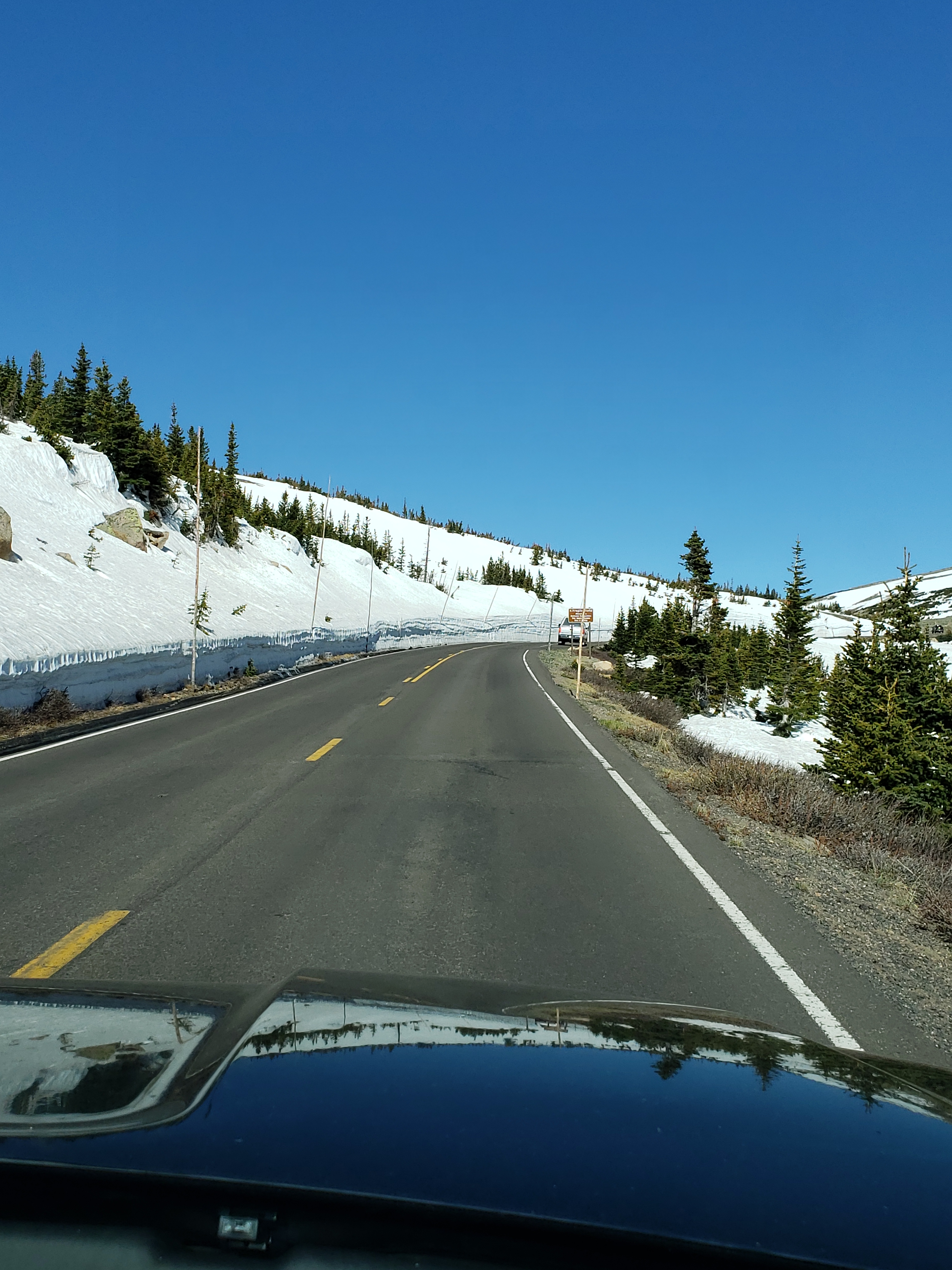 Our first stop was Forest Canyon overlook, normally a short walk over the tundra to a dramatic stone overlook platform. This day, we used micro spikes on our hiking boots to navigate the hard packed snow and ice that covered most of the asphalt trail! Mostly because we wanted to try them out…😋 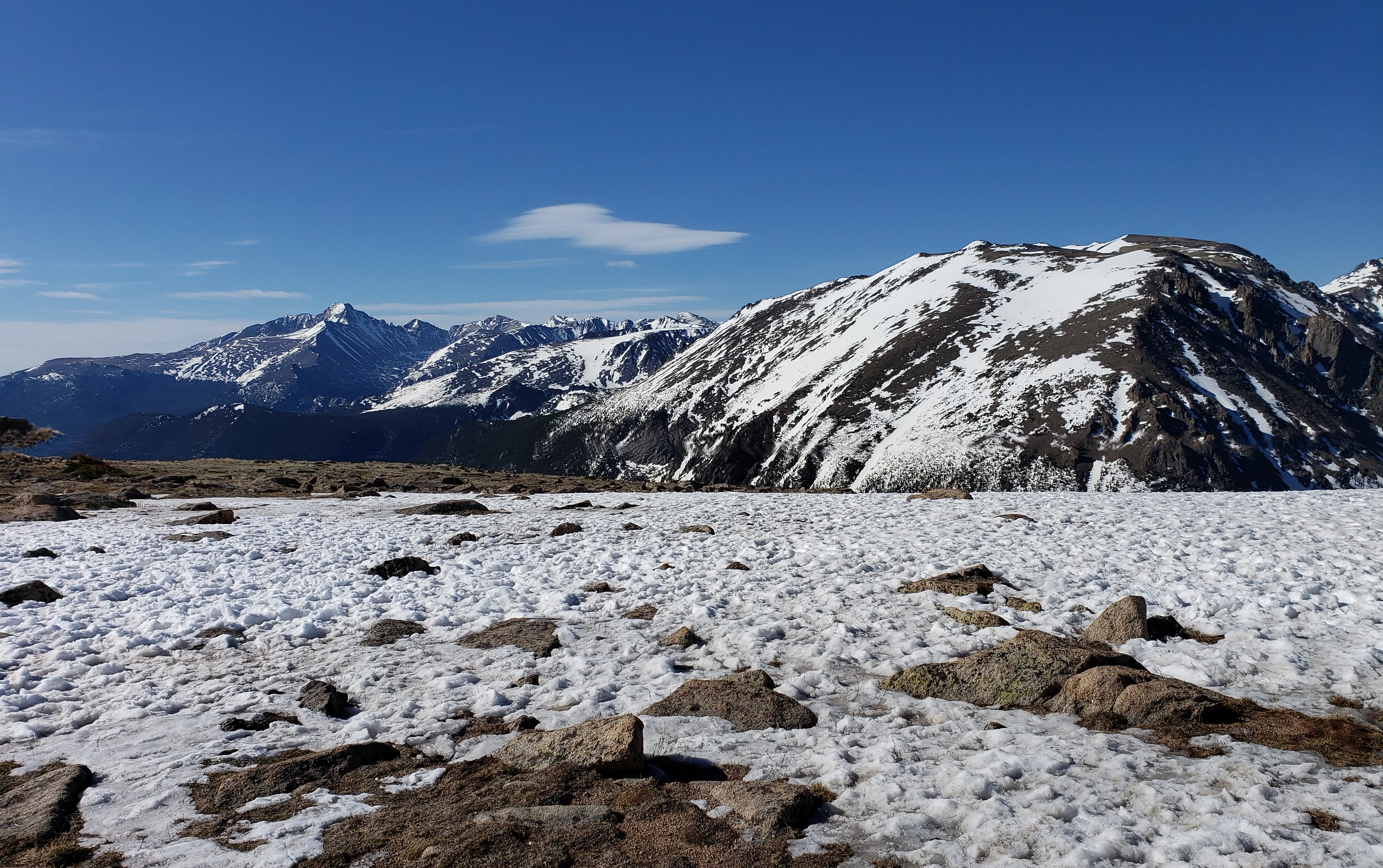 And of course, the views were spectacular! Panorama looking southeast.

Longs Peak in the distance 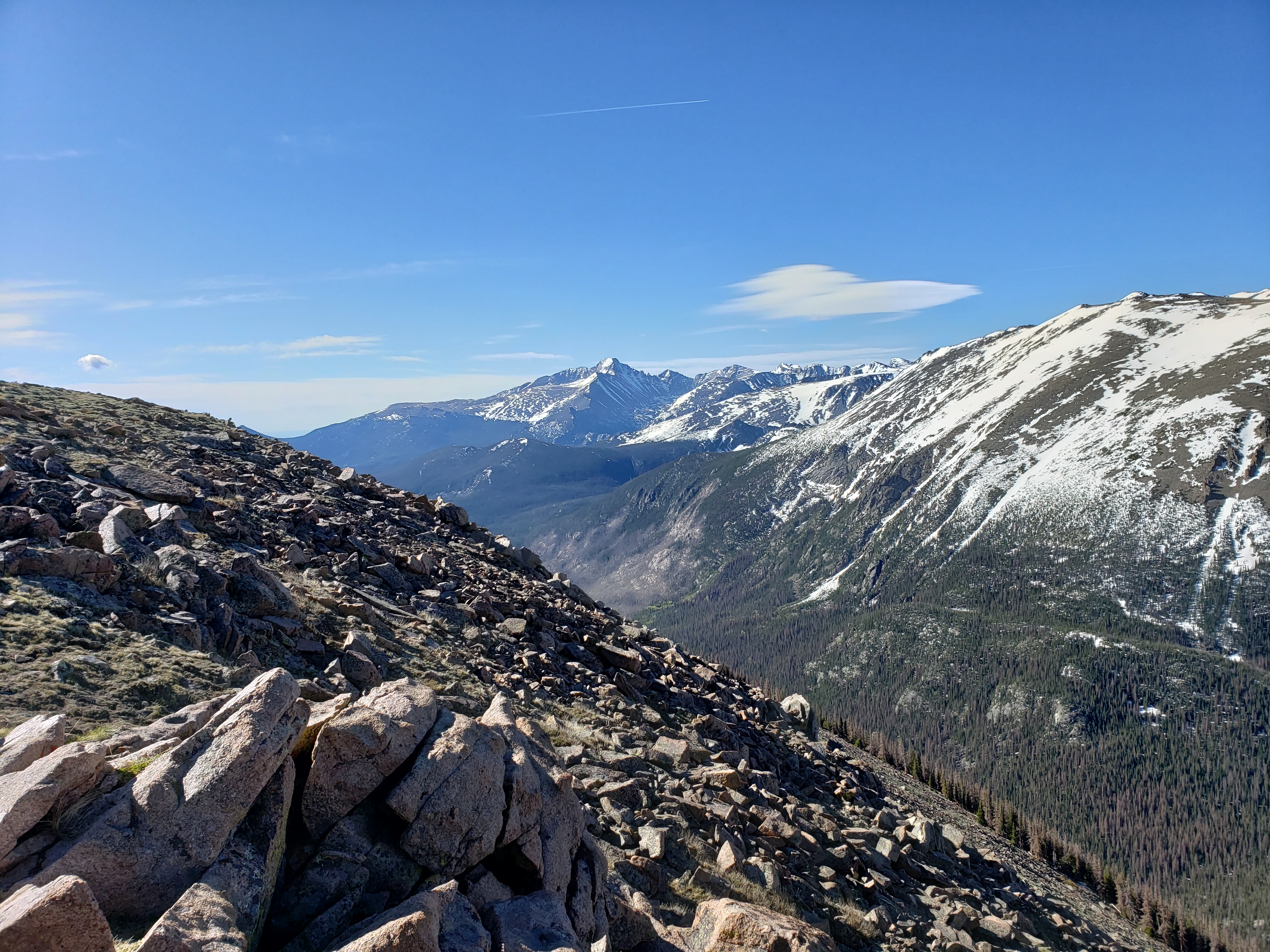 Snowbanks on the road approaching the rock cut.

Views from the rock cut area. Zoom in on the first picture to see the frozen lake. 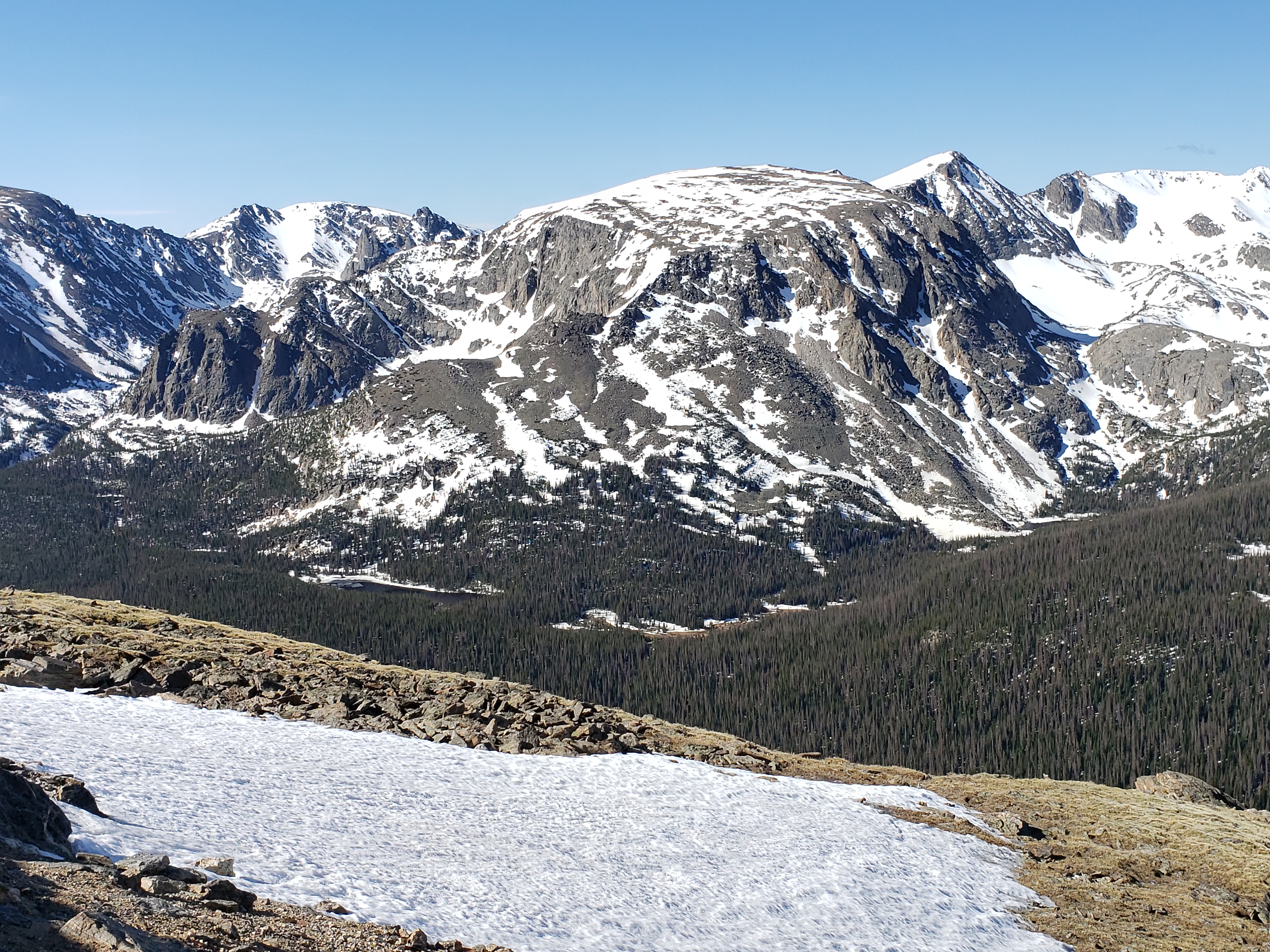 A quick stop at the Lava Cliffs overlook, mostly covered in snow, and the lake at the base was frozen!

The Gore Range overlook wasn’t too snowy, but the views were very beautiful. 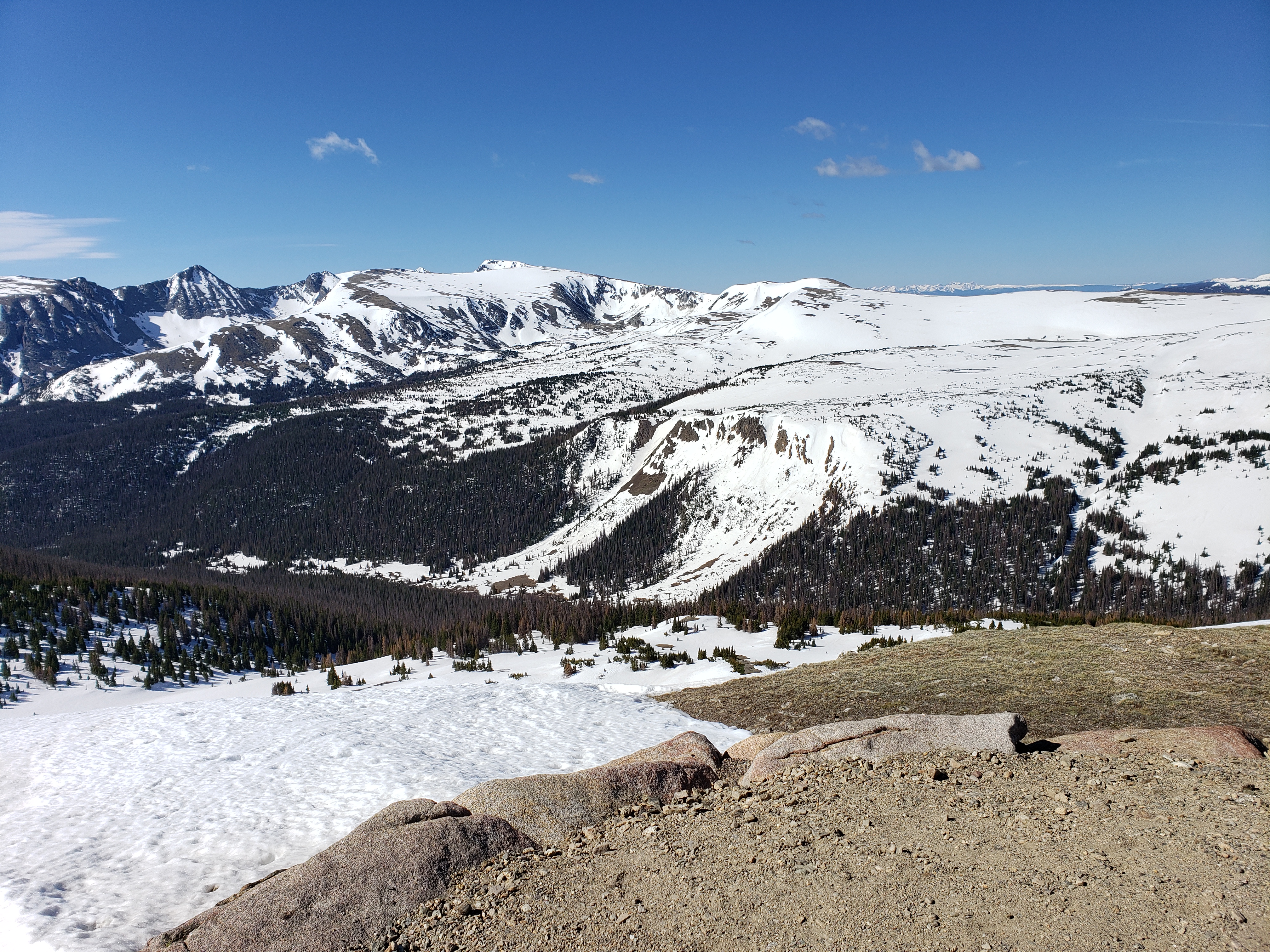 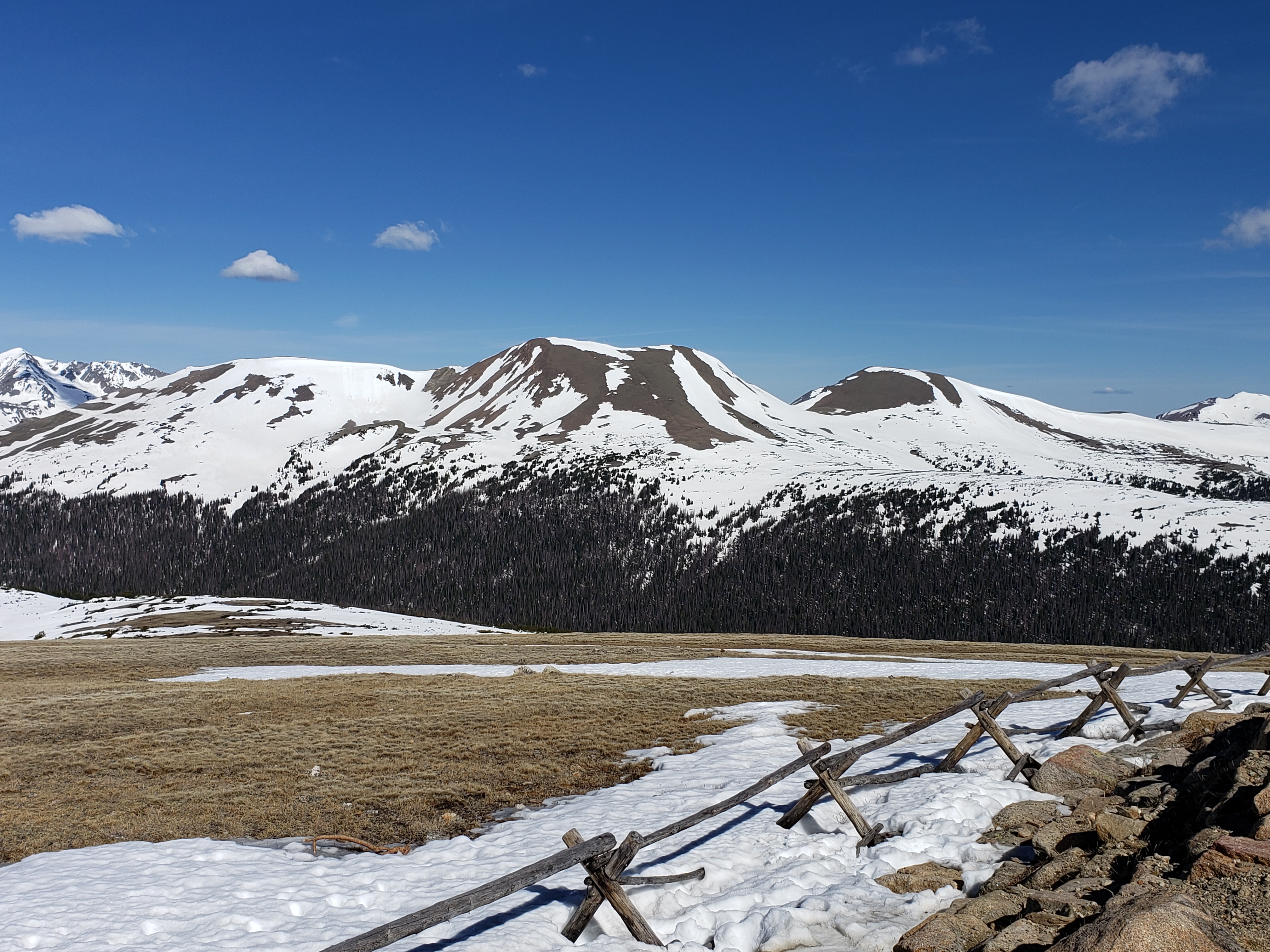 We stopped briefly at the Alpine Visitors center but didn’t take any photos. This was the valley just past there…with snow down by the Cache de Poudre River.

And looking back the other way…spectacular! 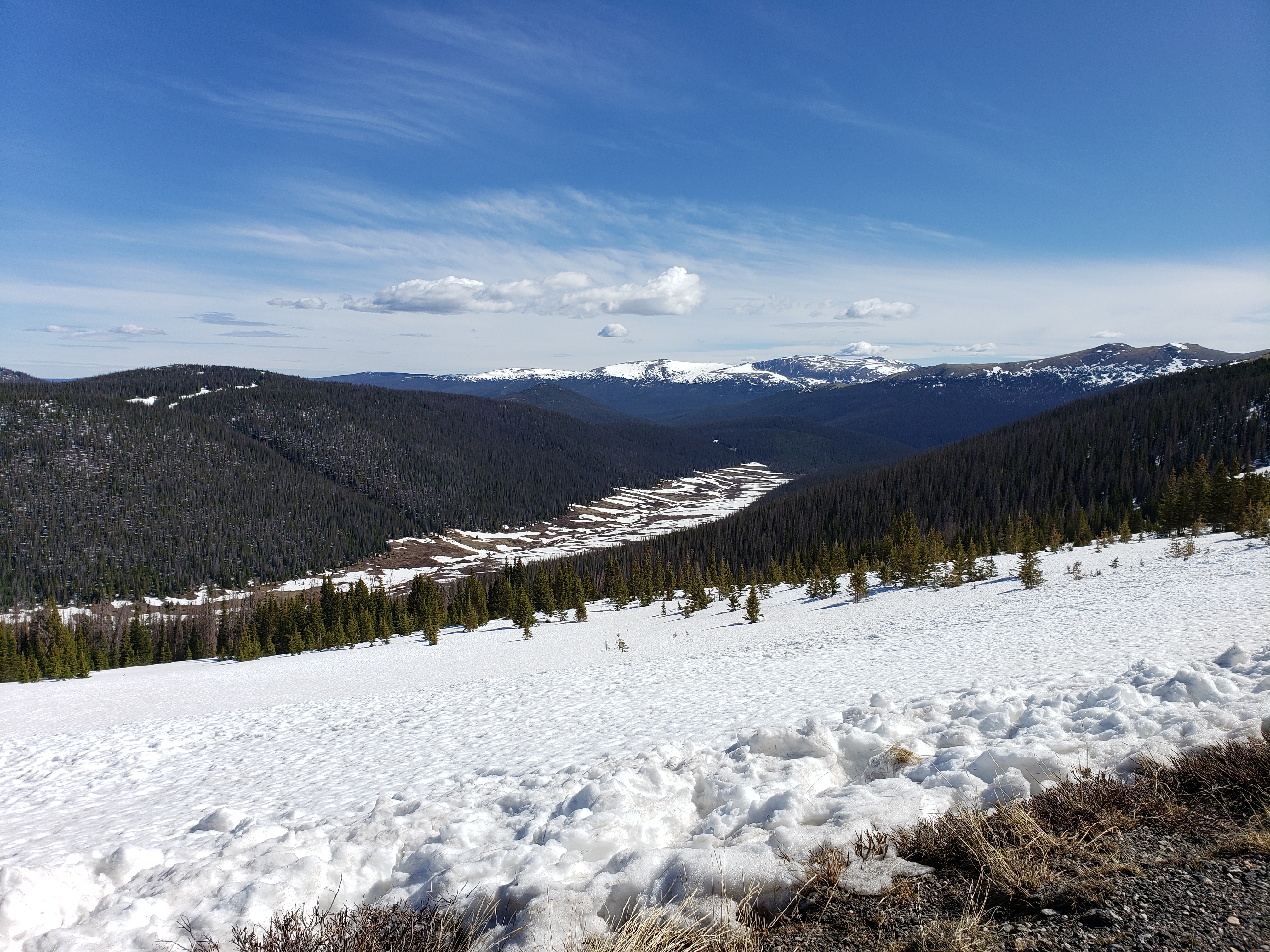 At Milner Pass, and the Continental Divide, we had to have tourist shots! 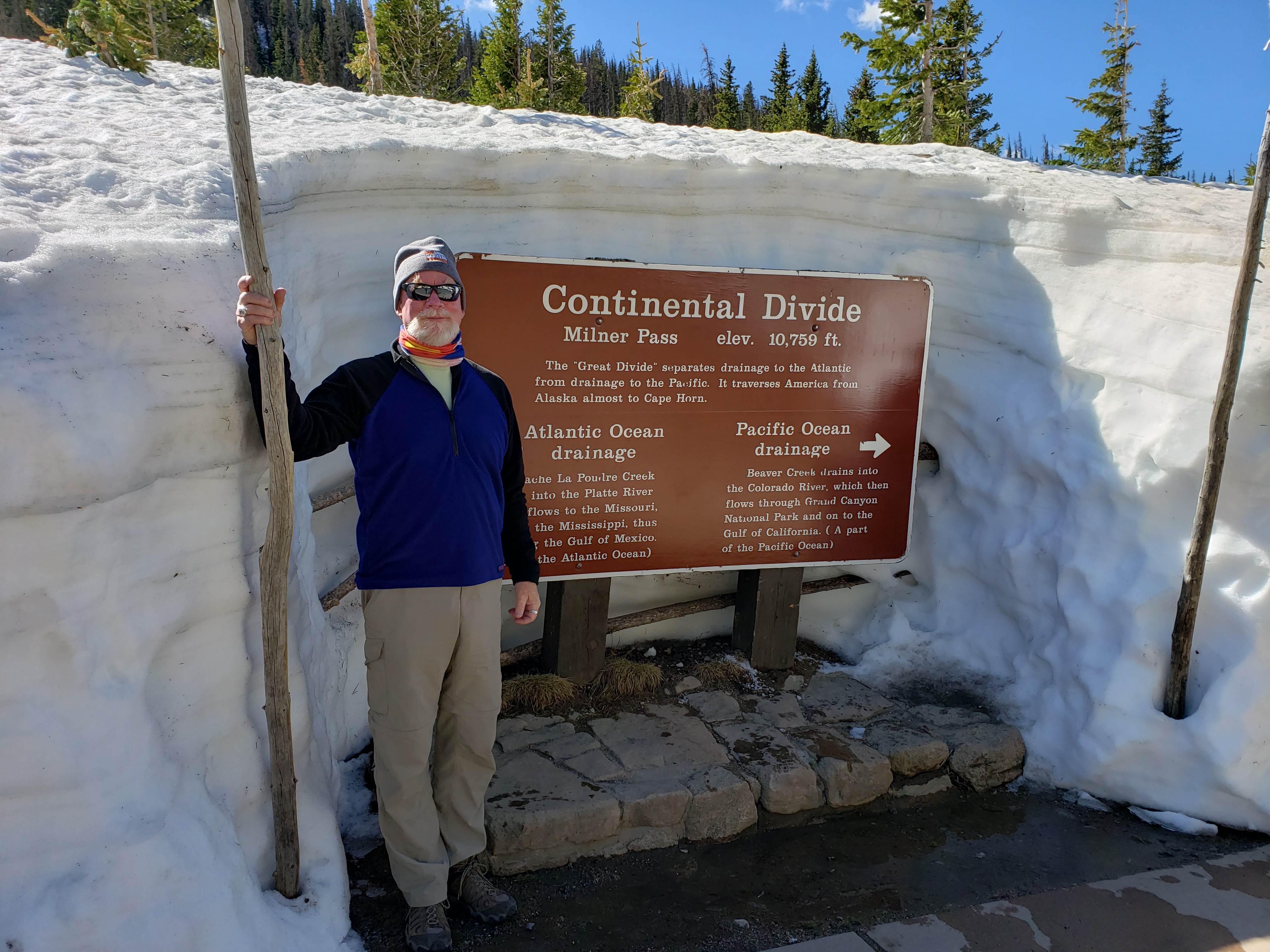 And, of course, a view of frozen Poudre Lake. 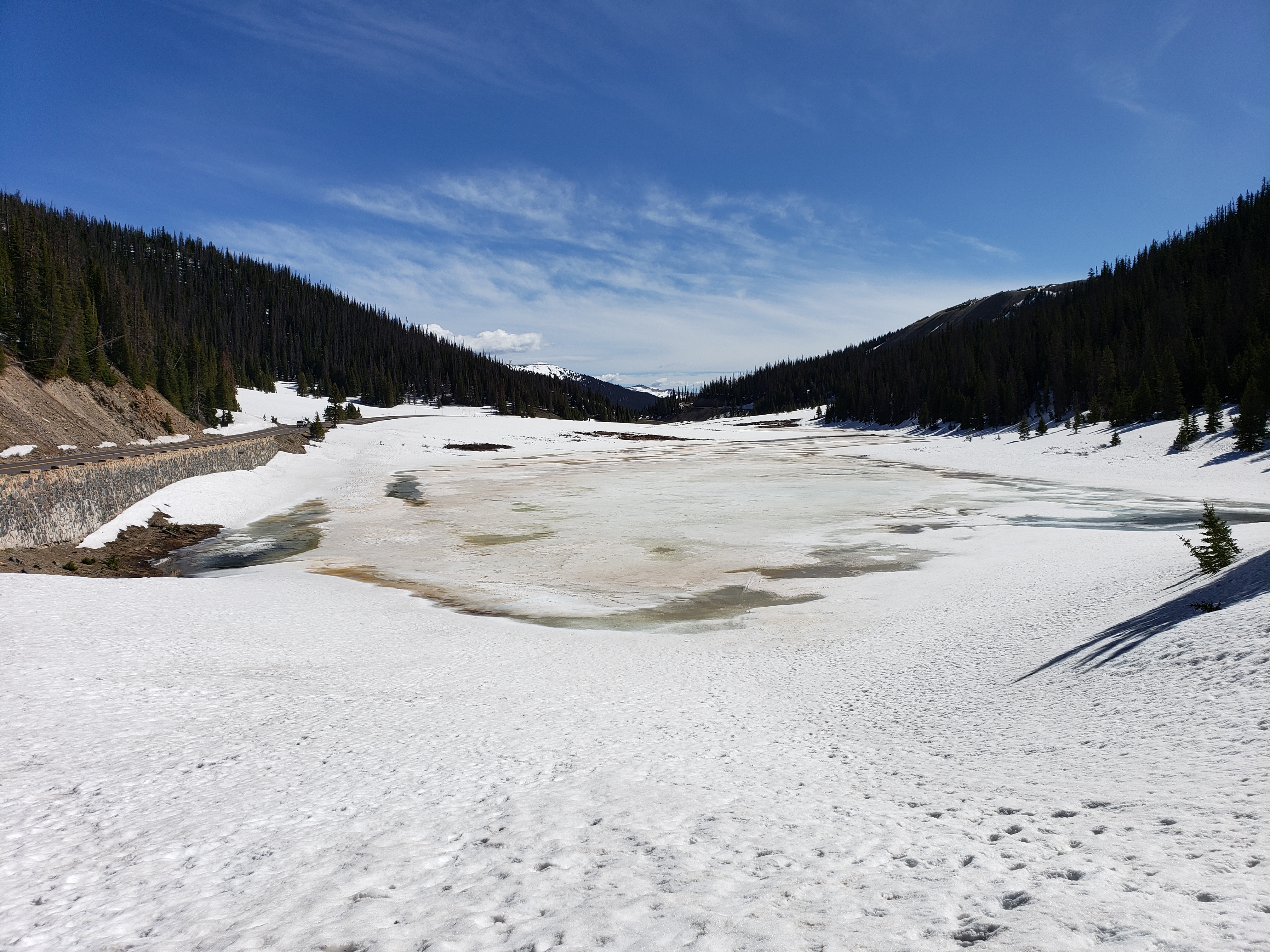 Our next stop looked like another day, in another world! No snow to be seen at Farview Curve, looking south and down to the Kawuneeche Valley.

Except when looking west toward the Never Summer Mountains, of course!

We next ventured just outside the southwest border of Rocky into the town of Grand Lake to hike back into the park at Adams Falls.No snow here, but the 55 foot falls were booming with the recent snow melt! Looking up the falls.

Looking down the falls behind us

The calm stream above the falls

Grand Lake from East Inlet after the falls hike

We drove around the town of Grand Lake to the narrow strip of land that separates Grand Lake from the larger Shadow Mountain Lake and captured this beautiful scene.

Last, but not least, one shot of the scenery in the Kawuneeche Valley, headed north on Trail Ridge Road, making time to get back to Estes for our afternoon shift at the campground. A morning well spent!

I hope you enjoyed this virtual tour of the snowy, and not so snowy, Rocky Mountain National Park!

The other day in Pacific Grove...what a lovely town! The John Denver crash site & Memorial, coastal cypress, tide pool views, snails munching on a deceased jelly, more Cypress and views at the Point Pinos Lighthouse. 🌞😎😍 #everydayadventures #enjoythejourney #pacificgrove
Wednesday's adventure part two, now we are at about 1800', did I mention the elevation gain is 3300???? We started at 9 AM. It is sooo steep, now it's approaching 2 pm, the trail is even tinier, then it goes through brush like a tunnel, one guy passes us, then a young couple, we are at 2800 feet when they pass us again going down. Young couple didn't make it. Other guy, no English. It gets dark here at 5, and rain is coming...we call it and head down, by 5 pm. 8 hours on this mountain and we didn't summit. But we survived. 😎 #everydayadventures #enjoythejourney #hikingisnotforsissies
Wednesday's adventure will be a two-part, because I have so many photos that beg to be shared. The Mount Manuel trail is the big daddy of trails in Pfeiffer. Advertised as 4 miles each way...NOT! 1.5 to the sign in pic 2. We started at 9 AM. It is sooo steep! #everydayadventures #enjoythejourney #hikingisnotforsissies
Way behind...Tuesday's adventure was a visit to an incredible natural area that is usually packed with tourists. Weekday visits are mandatory! This is the Bird Island and Pelican Point trail...simply stunning! So much more to see next time! #everydayadventures #enjoythejourney #pointlobos
Sunday brought another unique experience! We visited Point Sur Naval Station, which was a top secret post from 1958 to 1984. Recruits signed up for "Oceanographic Research", only to arrive to learn they would be listening for Soviet submarines! Folks who worked there STILL don't reveal what they did there! Unfortunately it has fallen into terrible disrepair, but a dedicated team of State Park volunteers conduct tours on weekends, and do restoration once a week as well. #everydayadventures #enjoythejourney #fascinatinghistory
Saturday we had whale watching duty with the Rangers again, and we had SO many visitors in two hours (65+) that of course I took hardly any pictures. But I had to post to report that a visitor pointed out a gray whale literally at the bottom of the cliff we were on! It was skirting a rock formation and we could see the whale in detail, flippers and all, just under the surface, then it surfaced and spouted just below us!!! Incredible! So sorry I don't have pics...it was magical! 🌞😎🐳 #everydayadventures #enjoythejourney #bigsurcoast #whalewatching