Prepare to be awed! This post is a compilation of two visits to the scenic crown jewel of Rocky Mountain National Park, Trail Ridge Road (AKA US 34). The first visit was prior to Trail Ridge opening for the season when we could only drive as far west as Rainbow Curve from Estes Park. The second visit was ten days later, the day after the road opened to cover the 48 miles between Estes Park on the park’s east side and Grand Lake on the west. This is part one of (at least) two since we only made it as far as the Alpine Visitor’s center on the second visit, about 25ish miles.

Trail Ridge Road is one of ten America’s Byways in Colorado and a national designated All American Road. It is the highest continuous motorway in the United States, with more than eight miles lying above 11,000′ and a maximum elevation of 12,183′. The name “Trail Ridge Road” derives from the nearby historic pathways used by native peoples to cross the Rocky Mountains for generations. Trail Ridge Road more than lives up to the superlatives. Eleven miles of this incredible highway travel above treeline, the elevation near 11,500 feet where the park’s evergreen forests come to a halt. Trail Ridge Road was constructed between 1926 and 1932 through the collaborative efforts of the National Park Service and the Bureau of Public Roads (now the Federal Highway Administration) and opened in July 1932. It was built to replace the original Fall River Road, a steep, shaded, gravel road that is a topic for another post. Due to harsh weather and the gravel conditions, Old Fall River road typically does not open until July.

Our first visit, on May 15th, was exploratory. We had not been in Rocky Mountain National Park since a motorcycle trip in 2006 when we approached from Grand Lake in the west and spent one night in Estes Park. It is mindblowing to me that we thought one day and night was adequate. Well, in all honesty, that is probably all the time we had, and I wish we had photos from back then!

Here are some scenes from the May 15th visit. I will refer to Trail Ridge Road as TRR for simplicity. The road winds around peaks and valleys, so the views are in so many different directions, but all just spectacular!

Our main stop this visit was Rainbow Curve, the closure point heading east to west until usually around Memorial Day. 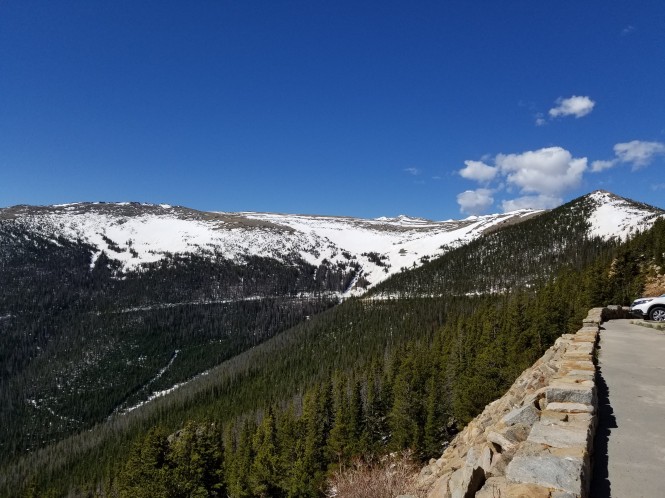 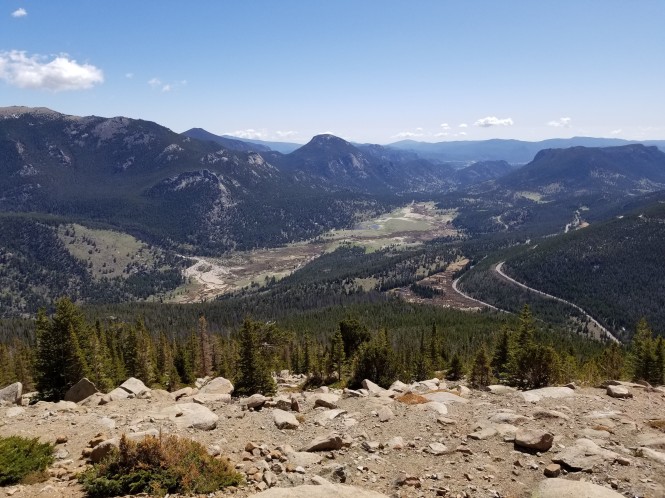 Looking east: Horseshoe Park and Aspenglen in the distance, TRR below this point on the right 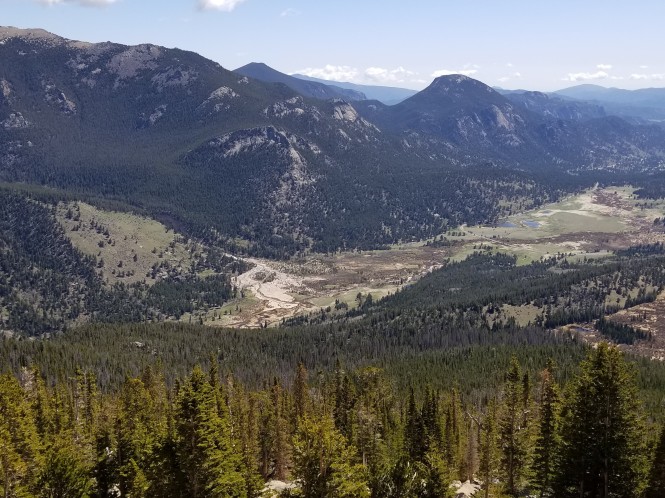 We walked past the road closure to look west from TRR. More awesome!

Looking north, and down to Old Fall River Road from Rainbow Curve

The side of TRR, a permanent rock slide! We even saw one tiny rock fall! :-O

Then we headed back down TRR, one more shot of the built-up snow!

Our next stop was Many Parks Curve.

Long’s Peak from Many Parks Curve

Zoomed in on Long’s Peak :-O 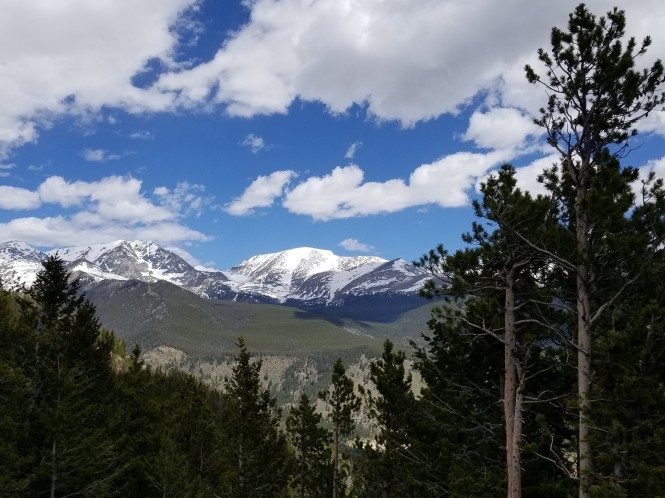 View from Deer Ridge Junction, the intersection of US 34 and US 36 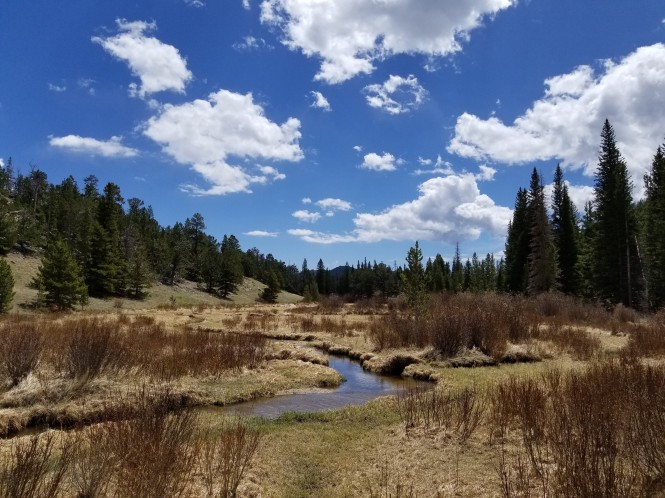 Our second visit to TRR was on May 25th, the Friday of Memorial Day weekend. The NPS opened TRR on Thursday, May 24th this year, so we got out there as soon as we could!

Since we had not visited the Alluvial Fan (visible in the photos above from Rainbow Curve) on our first visit, we stopped there first. This interesting topographical feature was the result of a terrible flood back in 1982. Lawn Lake was one of many natural lakes expanded in the early part of the 20th century to provide water storage in high mountain valleys. The remote dam was not visited regularly due to its remoteness and fell into disrepair. On July 15, 1982, the Lawn Lake dam failed catastrophically, and several people were killed. The wall of water forced large boulders down 2,500 vertical feet to Horseshoe Park and the forested banks of Roaring River were scoured away in a landslide of thousands of tons of material. An alluvial fan quickly formed at the mouth of Roaring River. The fan is better visualized from above, but the scale of the boulder field is awesome up close.

The Roaring River in the Alluvial Fan 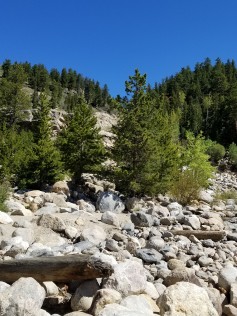 Boulder fields in the Alluvial Fan 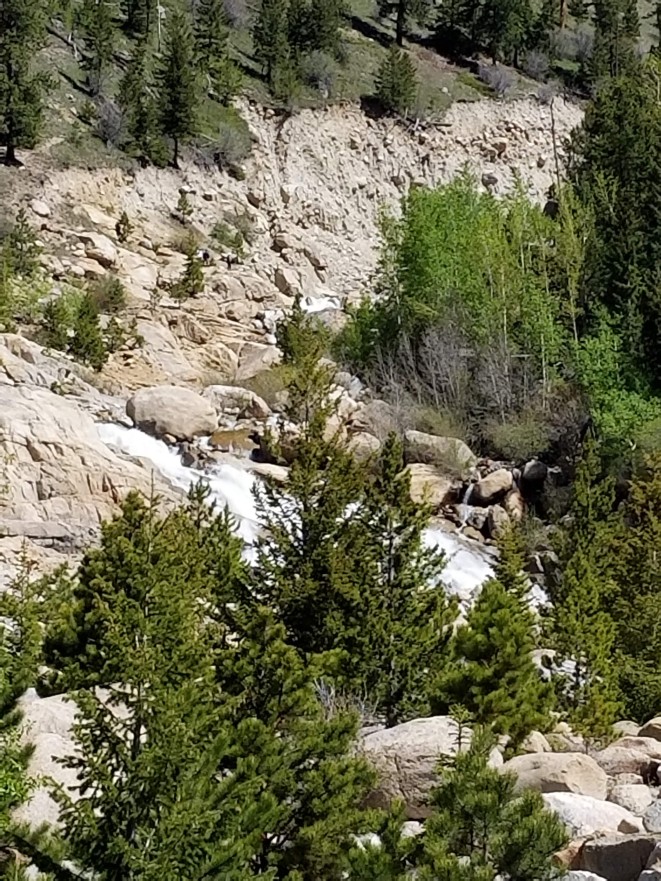 Since we had already visited Many Parks Curve and Rainbow Curve previously, after leaving the Alluvial Fan area, we passed them by and headed straight for Forest Canyon overlook. Climbing TRR past Rainbow Curve.

Looking down into Forest Canyon, formed by the Big Thompson River 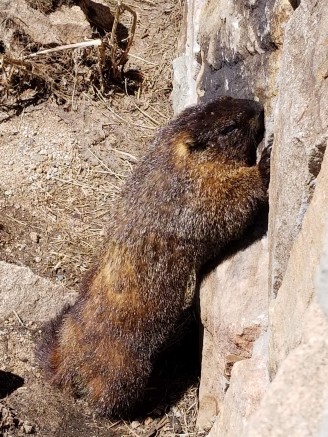 Just for a giggle…Jerry silently singing “The Hills are Alive”! 😀 But you can see the amount of snow still hanging in there at Forest Canyon too!

Our next stop was a wonderful glimpse of the Alpine tundra, above the treeline, is located at Rock Cut near the top of Trail Ridge Road. The parking area is 12.9 miles west of Deer Ridge Junction (Highways 34 and 36), and 4.1 miles east of the Alpine Visitor Center. Although the wildflowers had not yet appeared, it was a wonderful ~ 1-mile hike with incredible views.

Our destination on the right

A worthy side trail leads to Mushroom Rocks

The extreme weather and freezing forces rocks to the surface in a fascinating landscape! 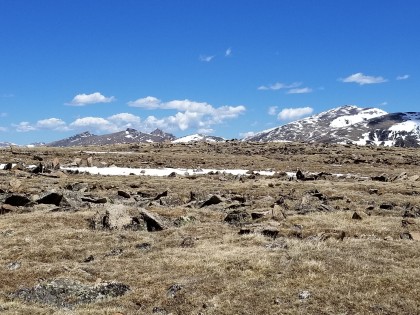 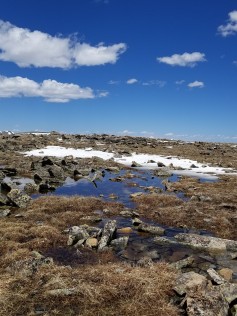 The trail culminates in a memorial to former RMNP superintendent Roger Wolcott Toll, mounted within the incredible rock formations. 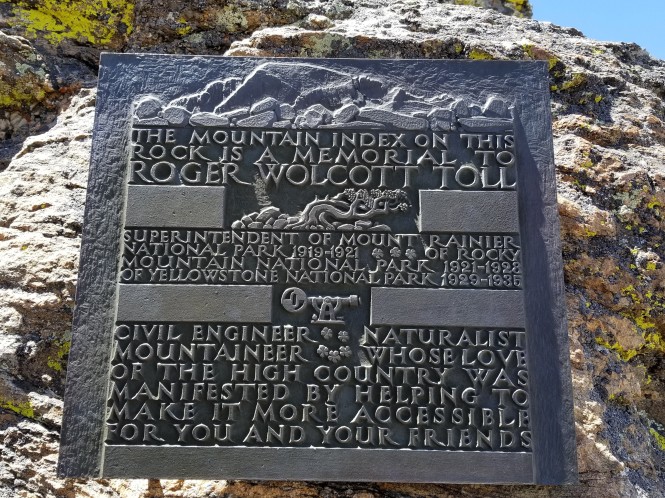 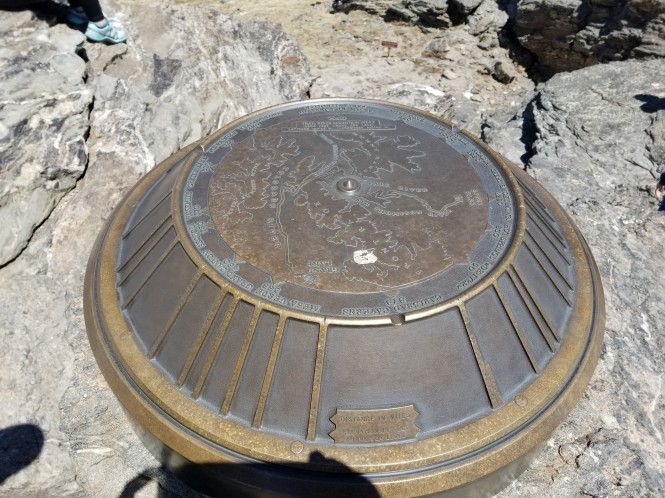 At the top of the rocks, you’ll also find a large geological marker that provides mileage and elevation data for the surrounding mountains, as well as for other parks around the country. From this vantage point, you’ll have outstanding panoramic views of Longs Peak, Fall River Pass Road, the Alpine Visitor Center, and the four major mountains of the Mummy range, including Mummy Mountain, Chiquita, Ypsilon, and Chapin.

A brief video from a climb to the top of the rocks…breathtaking!

Panorama from the Tundra Trail

After our hike, we continued west on TRR toward the Alpine visitors center, passing the highest point on the road at 12,183 feet! 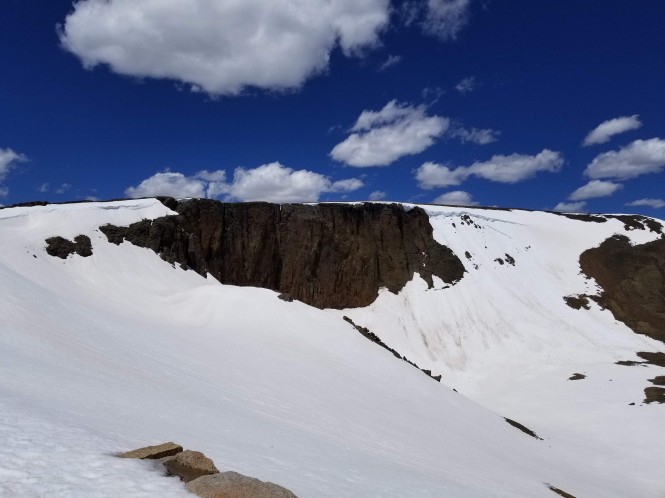 Lava Cliffs created from an ancient explosion millions of years ago

Snow banks near the highest point on the TRR

Driving off the edge of the world!

We stopped at the Alpine Visitors Center, which was thick with crowds on this start of the holiday weekend. We chose not to picnic among the crowds but instead headed to the Gore Range overlook a few miles back east.

Panorama from the Gore Range overlook

Our picnic view from the car 🙂

View heading back east on TRR 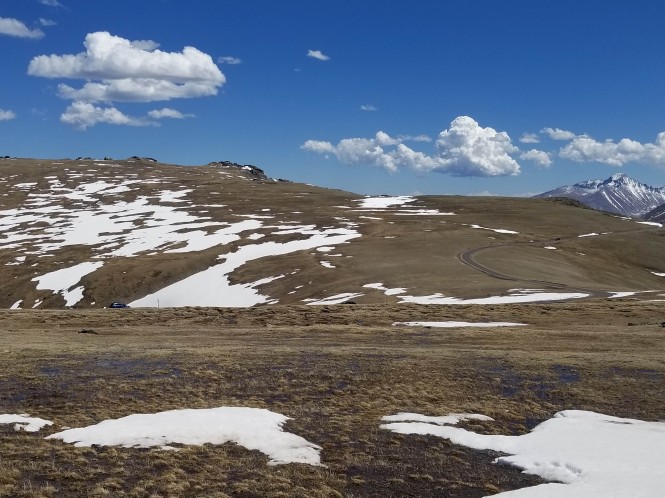 Last shot of the tundra and the TRR stretching east

Our last stop was at the Beaver Meadows Visitor Center, where we watched a wonderful historic film about Rocky Mountain National Park, and of course, added another park stamp. This incredible piece of art decorated the stairway down to the theater.

I hope you’ve enjoyed this brief visit to Rocky Mountain National Park (RMNP). It will be one of many during our stay here in Estes Park this summer. If you’d like to read more about our adventures in RMNP, you can go directly here.