If you haven’t read part 1 or part 2 yet, you might want to do that now. Go ahead, it won’t take that long.

During our time in Puerto Rico, L and I had time to relax and catch up over frosty and festive adult beverages on a daily basis. It had been a long while since we had been able to do that, however. As I mentioned in part 1, we have been friends for many years and share a lot of history. We once traveled all over the US as contract telecom installers, living out of hotels and carrying massive toolboxes…but that is a story for another post.

Anyway, we live in the same general area, but don’t get to see each other as much as we’d like these days, due to busy work schedules and lives. It was so good to spend some quality time together and get current on recent events. We also spent a lot of time reminiscing about other times when G was able to be with us, and missing her on this trip. We have both had our share of times when family had to come first, and we took on the caretaker role, so we completely understood and wished her strength, love and courage to support her family.

On this final full day of our getaway, we were set for an early shuttle pick up at 8 AM. Back to Fajardo we went, as Fajardo is a center of boating activities in Puerto Rico. We were to spend the day cruising, snorkeling, and picnicking on a 54’ catamaran called Traveler. It was a colorful crowd on our boat, and everyone appeared ready to have some fun in the sun. And there was shade for those who preferred it, as well.

Photos from the sail out to Icacos Island:

Leaving the marina in Fajardo

Passing a hillside resort with a funicular!

Our first snorkeling site. Lots of boats, lots of snorkelers. 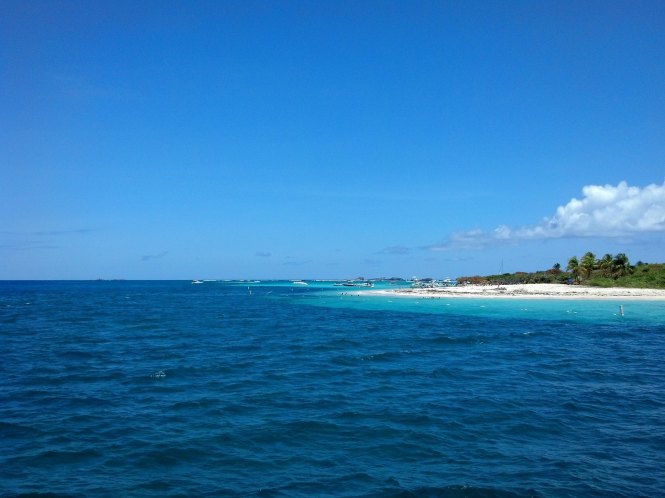 At this site, we were given a quick briefing on snorkeling, asked to use the buddy system, and let loose. They did point us in a general direction of the reef. Sadly, this was the worst example of the ravages of tourism on natural resources that we had seen since arriving in Puerto Rico. The reef looked gray and lifeless, and fish were a rare sight. We snorkeled for 30 or so minutes, floated in the gorgeous water a little longer, then returned to the boat.

The Traveler did put out a nice spread for lunch after our snorkel. I was fascinated by the woman on the crew who looked “grandmotherly” and treated both crew and customers as if she were. In talking to her, the world got a little smaller, because it turned out she had spent years in Florida near where L and I grew up. When her kids were out on their own, she decided to move to Puerto Rico and start a new life on the sea. I admired her for following her dream, and living life on her own terms!

After lunch, we moved to the second snorkeling site.

Looking down into the water from the boat

After everyone finished their snorkeling at the second site, which was sadly just as disappointing, the crew broke out the rum drinks. L and I grabbed life vests, our rum drinks and back into the water we went. There is nothing like floating in sparkling blue-green water with a festive beverage! We knew G would have loved this part…beach baby that she is.

Getting ready to dock

In the end, it was a low-key day that capped off a relaxing yet exciting trip to Puerto Rico, for me and my long-time friend. It was a time to just enjoy each other’s company and reflect on friendship, family, lives well lived, and adventures to come. And we had G with us in spirit.

Within two months of this trip, our dear friend G lost both her favorite Aunt and her Father. Though she was sad not to have been able to make the trip, she has the memories of being with her family when they needed her most, and I hope that those memories can continue to bring her comfort for many years to come.

And when she’s ready, an EPIC girls’ getaway is in order!

16 thoughts on “A girls’ getaway to San Juan – The conclusion”