Oh. My. God. How is it possible that I last posted in February? All I can say in my defense is that retiring is the single best decision we have ever made and that we have been living the dream since March of 2015. Between RV trips, bike trips, and the occasional car trip, it doesn’t leave much time for documenting all the fun!

As a reminder, this bucket list adventure took place in the summer of 2015. I considered just letting this story end with part 3, but there is still so much more to share from this trip. So…if you haven’t followed from the beginning, or you are a normal human and can’t remember everything you read MONTHS ago, here is the link to go back to Part 1. Each post has a link at the bottom to the next installment. Go ahead, I’ll wait. I’ve already waited 5 months to continue this saga, after all. 😉

Although it fell behind the Beartooth and Chief Joseph scenic byways in our must-ride priority list, we very much enjoyed the Big Horn Scenic Byway when we finally rode it. We actually started out to ride the Big Horns from Cody, in Part 3, but the 60-mile run across the Big Horn basin and the late hour that day deterred us. All I can say now is that it was worth it, and then some!

This time, we left Billings and ran I-90 east and south a little over 100 miles into Wyoming, and exited at US 14, near the town of Ranchester. Yes, we rode farther to get to the scenic byway than we would have from Cody, but the difference was the early start on this day. A small town gateway to the Big Horn mountains, Dayton was picturesque, we were hungry, and so we stopped for coffee and breakfast al fresco.

Breakfast at the Branding Iron Cafe

Heading west out of Dayton, you cross over the Tongue River Canyon, and climb, and climb, with switchbacks providing views of the valley below. Spectacular! Of course, we didn’t stop for photos, we were on a mission. You will just have to go see it for yourself!

Our plan was to ride US 14 to near Shell, Wyoming, the western end of the Big Horn Scenic Byway, and then double back to Burgess Junction, where Alt US 14 heads northwest to Lovell, allowing us to complete a huge circle and end up back in Billings, Montana.

On our westerly route on US 14, we experienced alpine forests, beautiful Sibley Lake, and amazing rock formations. Once past Burgess Junction, the terrain changed to alpine meadows and giant pines, and we crossed over Granite Pass, at about 9000 feet in elevation. The elevation drops after the pass, the scenery changes to high desert, and many creeks provide visual entertainment. And then you reach Shell Falls and gorgeous Shell Canyon. I will let the pictures do the talking for a bit… 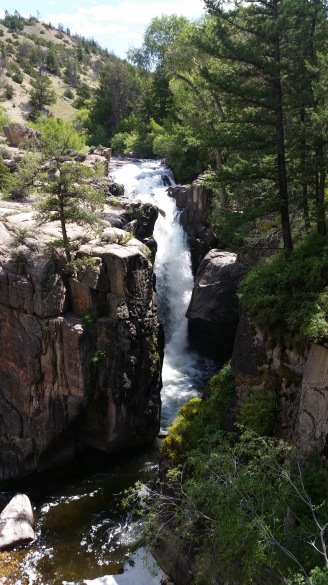 Shell Canyon looking back toward the falls

We spent the good part of an hour at Shell Canyon and walked along all the overlook paths, which provided not only views of the falls, but also dramatic views of the surrounding high desert landscape. 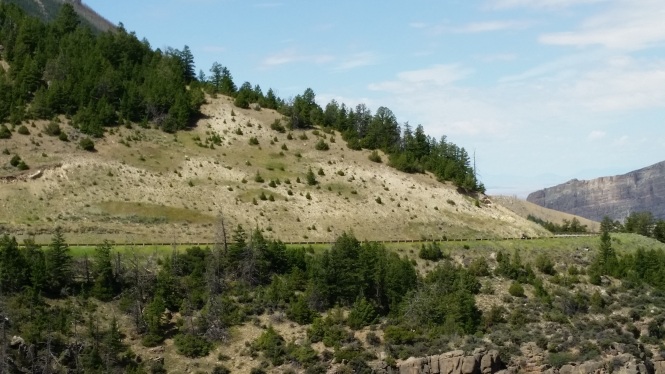 We finally dragged ourselves away and continued  west to the edge of the Big Horn National forest. We descended the last of the Big Horn mountains, then turned around and took in the vistas of red rock hoodoos, silhouetted against giant multi-colored, multi-layered mountains.

Looking east to the Bighorns

After the photo op, we headed back up the byway, enjoying the curves and switchbacks when much to my poor hub’s dismay, another overlook appeared! 🙂

All the riding and scenery made us very hungry and we were well overdue for lunch so we wasted no time in getting back to Burgess Junction, where the Bear Lodge Resort promised many hearty options. Upon hearing our plans to head west on Alt US 14, our waitress told us about an ancient Native American stone monument, the Medicine Wheel National Historic Landmark. Despite the fact that we would have to hike a mile and a half to the landmark, we knew we had to visit this mysterious sacred place. We also discovered that Alt US 14 is called the Medicine Wheel Passage Scenic Byway. 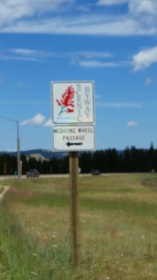 Sorry about the fuzzy photo 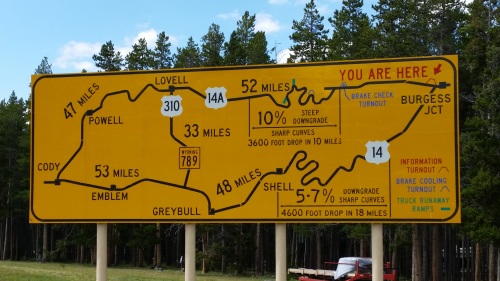 I was compelled to include the photo of the map…the riding around the Big Horns is nothing short of amazing. Here is a glimpse of the scenery on the way to Medicine Wheel.

We rode west on Alt 14 from Burgess Junction about 25 miles, turning north on gravel road 12 for another couple of miles to the parking area for the Medicine Wheel. There is a road from the parking lot up to the landmark, but it is only used for permit-approved handicapped access, primarily for elderly attendees of traditional Native American ceremonies. 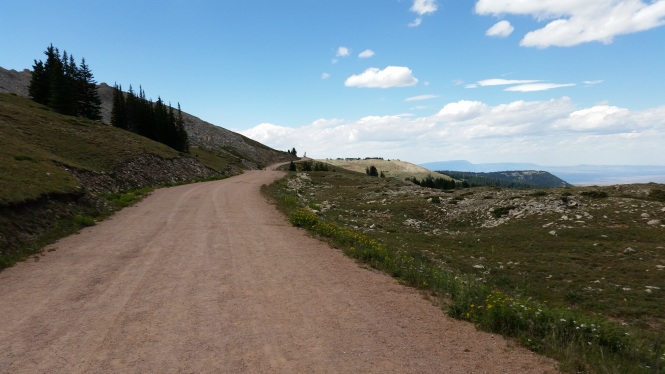 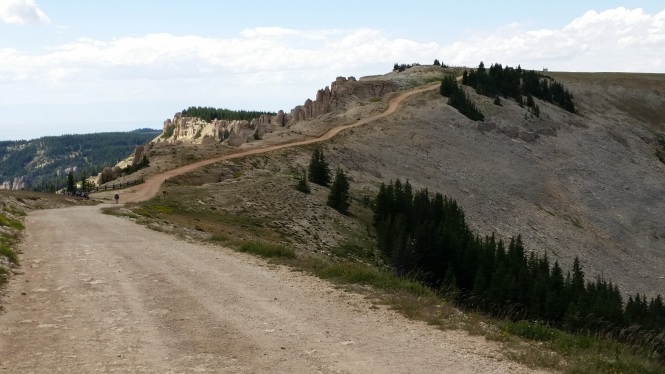 The low spot in the middle is the waiting area, then up higher to the wheel

The hike is a long ascension to a waiting area with historic information and beautiful views, where visitors are held if a ceremony is in progress, and then to the wheel at an elevation of 9642. There was a ceremony taking place, so we waited about 40 minutes and chatted with the interpretive rangers about life in the wilderness of Wyoming and the mysteries of the wheel. 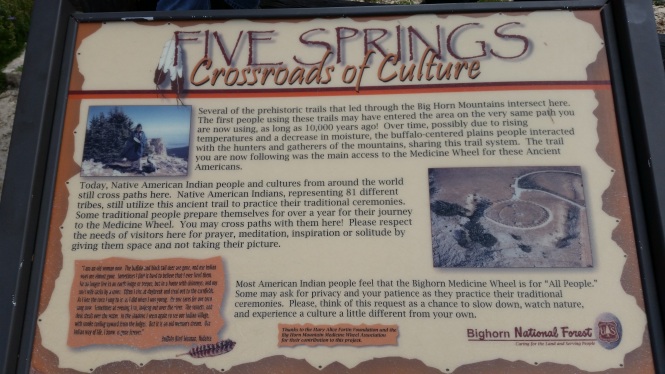 Information about ancient paths crossing at the waiting area

Once we were given the okay, we continued up to the wheel, and it is difficult to describe the feeling that came over me. Despite the 10 or 12 other people visiting, it was a solitary and serene feeling, very mystical and powerful. The wheel is a construction of stones approximately 80 feet in diameter, in a hub and spoke pattern, with 28 spokes. Exactly when and why it was constructed remains a mystery, but suffice it to say it has been revered for generations of peoples of many tribes and is protected for its historical significance today. 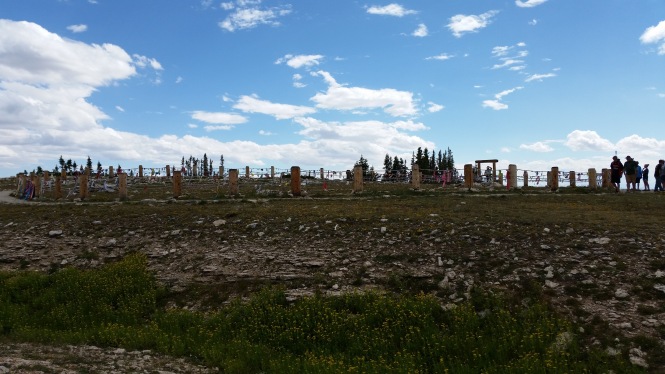 Walking up to the wheel

This aerial view shows the layout 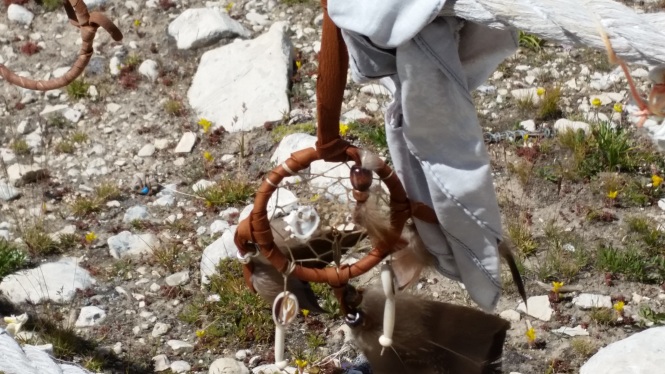 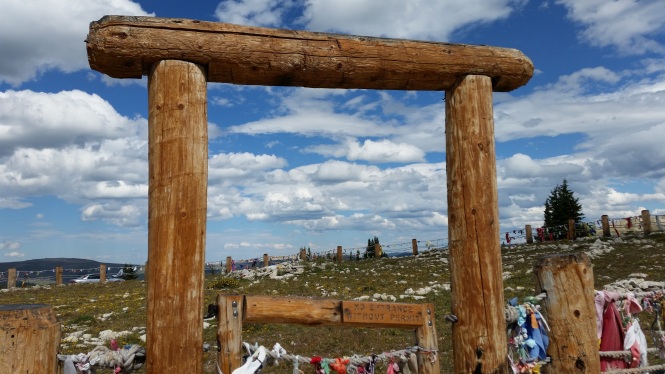 The entry gate is restricted to ceremonial use only

Although we were not previously aware, the Medicine Wheel is part of a large interrelated group of Native American ceremonial and archeological sites and is thought to have been in use for thousands of years. It was truly an awe-inspiring visit and I would encourage anyone in the area to seek out this unique treasure.

A few shots of the views surrounding the wheel, and our path back down to the bikes. 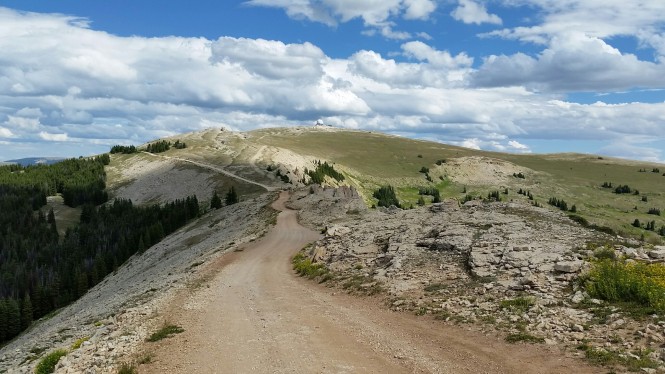 The beginning of our path back to the parking lot, a rocky alpine meadow 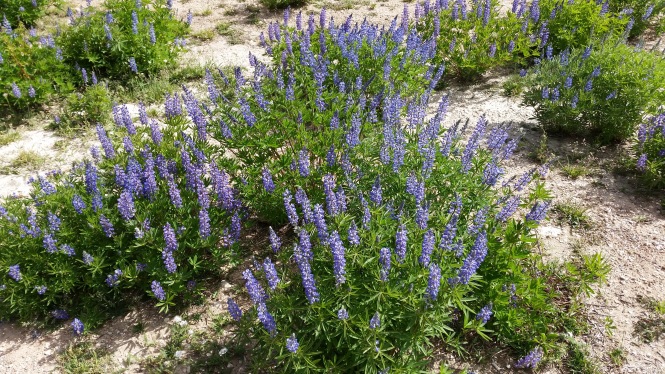 Blue Lupine at the parking lot

The trip down from the Big Horn mountains into the Big Horn basin was a surreal and twisty descent into how I picture a moonscape. It was beautiful and dramatic, and indescribable. And then the moonscape abruptly disappears and the Big Horn river morphs into Big Horn Lake, and you leave the desolation for the relative civilization of the town of Lovell. Lovell is also the home of the Pryor Mountain Wild Mustang center, so we will have to return to this area for a visit, as it was too late by the time we passed. The rest of the trip, on US 310, and then a short bit of US 212, took us to I-90 and back to the fairgrounds in Billing. It was a wonderful trip back in time, but also complimented by the incredible motorcycle riding in the Big Horn mountains. Thanks for coming along…a new installment has finally been posted here, click for quick access.

13 thoughts on “About last summer, Part 4-The Big Horns and Medicine Wheel”

Leave a Reply to The Hook Cancel reply