We have been fortunate to have the weekend off to rest and recreate prior to starting work at Estes Park Campground at Mary’s Lake on Tuesday, May 15th. If you have no idea what I am talking about, you may want to go read The Next Chapter before continuing here. Go ahead, I’ll wait! 😉

We arrived here on Sunday, May 6th, had a wonderful get-together with our new team that night then got settled on Monday the 7th. However, winters are tough here at 8,000 feet, and the campground was experiencing multiple breaks in the water system, so maintenance was working double time, and we all pulled together (literally) to drag hundreds of feet of hose from the well to each host rig to keep us clean and hydrated. One of the leaks happened to be on our site, so we moved for a couple of days, no biggie. We were able to move back on Friday night.

We had four days of training that was absolutely awesome. We had a full day of orientation about the Estes Park Recreation and Park District, the campgrounds specifically, and our responsibilities, then a full day on the interface we will use to access the nationwide Reserve America system, then a full day of CPR and First Aid, and finally, a day of learning to dispense propane and then a detailed tour of the campground. So thorough, and we learned easily because of the practice involved.

Yesterday was our first day off, but we spent most of the day doing laundry (it had been stacking up!) and personalizing our site. Then we did some touring around Estes, and of course, found more majestic Elk. If you follow this blog, you may get sick of Elk pictures! 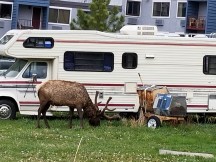 They were one street off the main drag. They are literally everywhere. But these were the first we had seen with such large antlers!

In addition, we watched the rain roll in and enjoyed a great OGG’S FM (F^%K’N MAGIC) ALTBIER at Lumpy Ridge Brewing. So far, Lumpy is our favorite Estes Park Brewery. And Ogg’s is our favorite beer. BTW, the descriptive name of the beer is direct from the website. LOL 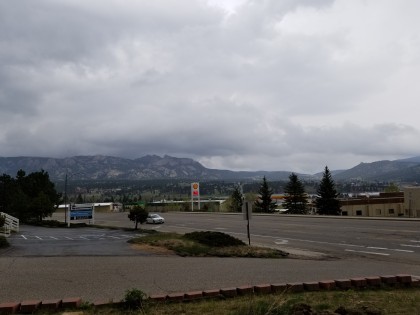 Today, we truly took a day off. We started with our morning yoga routine, breakfast, and then headed about 3.9 miles to the trailhead at Lily Lake, on CO 7.  We had stopped here a few nights before, but not hiking, so today we remedied that.

Lily Lake is part of Rocky Mountain National Park, but there is no entrance requirement here. The elevation at the lake is 8930 feet, however, so it is a good place to acclimate. There is a lovely, flat .08 mile loop around the lake, but there is also a climb on Lily Ridge Trail (~ 1/4 mile) with views of Meeker and Long’s Peak, as well as, Estes Cone. So, up we went!

View from Lily Ridge, Estes Cone center, with Long’s Peak hidden in the clouds to the left

It was a climb, but a great way to build stamina. The views were incredible, as were the rock formations. 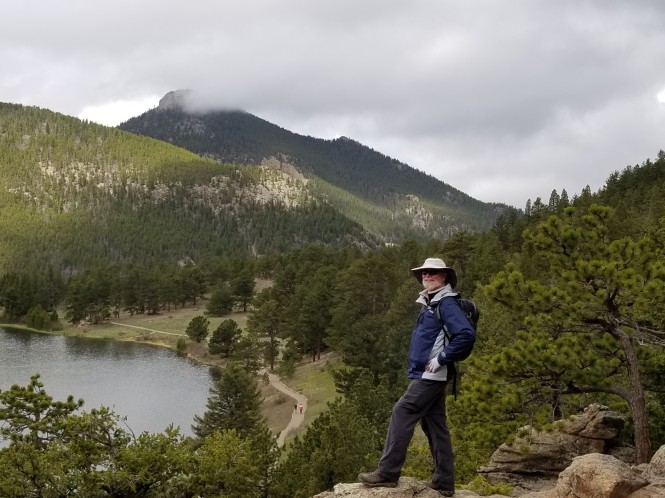 Rock formations and hardy evergreens on the ridge

Goofy selfie and part of the ridge trail in the photos below.

Once we descended from the ridge trail, we headed up a side trail which leads to the Storm Pass Trail, a 7.5-mile access to Estes Cone. We didn’t plan a hike of that length, so we kept going around to the Lily Lake parking area. But we WILL be back! We had brought a lunch, so we enjoyed our picnic right at the edge of the lake.

We then walked the loop trail and were amazed by the gorgeous scenery, as well as, multitudes of birds, ducks, geese, and even a beaver who swam within feet of us! 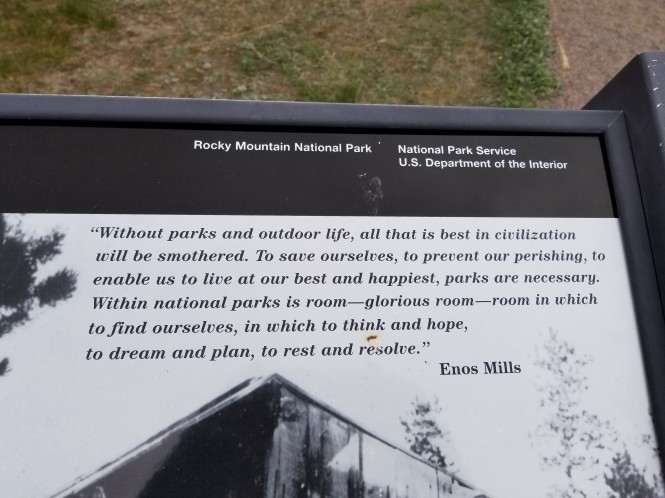 This quote from the “Father of Rocky Mountain National Park” Enos Mills, touched my heart

Enos A. Mills was born in Kansas but moved to Colorado early in his life during a bout with digestive illness. At age 15, he made his first ascent of the 14,255-foot Longs Peak. Over the course of his life, he made the trip 40 times by himself and nearly 300 additional times as a guide. In 1887, after returning to health, he moved to Butte, Montana. There he lived and worked intermittently until 1902, spending more summers traveling the West Coast of the United States, Alaska, and Europe. In 1889, he had a chance encounter with famed naturalist John Muir on a San Francisco beach, and from that point on Mills dedicated his life to conservation activism, lecturing, and writing. Aided by groups such as the Sierra Club and the Daughters of the American Revolution, Mills succeeded and Congress established Rocky Mountain National Park in 1915.

A few more photos from the Lily Lake loop. 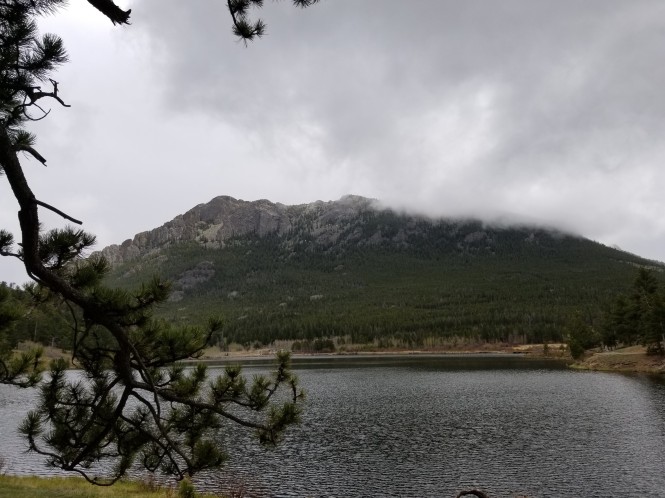 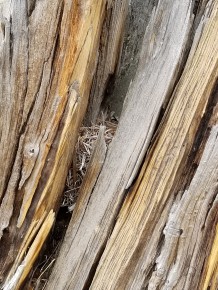 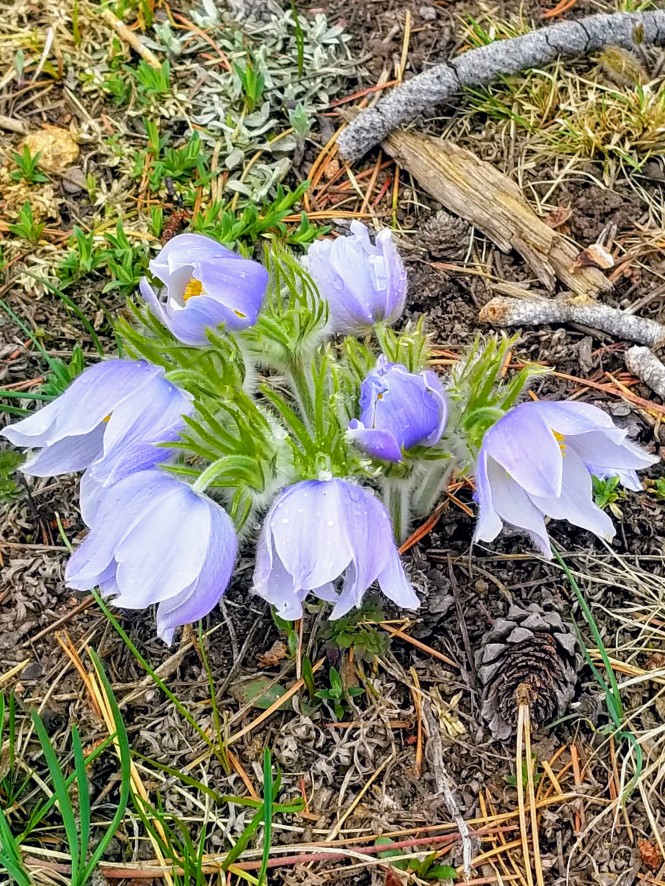 I believe this may be a group of Pasqueflowers

We left Lily Lake and drove a few miles south on CO 7 to the tiny community of Allenspark, to see the incredible Chapel on the Rock (St. Catherine of Siena Chapel). Pope John Paul II visited here in 1993, and it is truly spectacular! It is open to the public daily except in the case of private ceremonies. 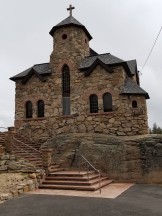 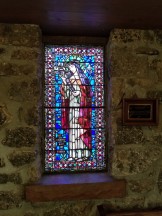 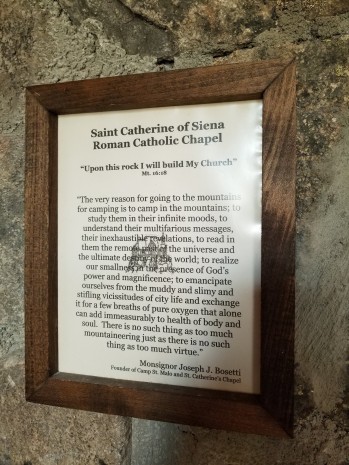 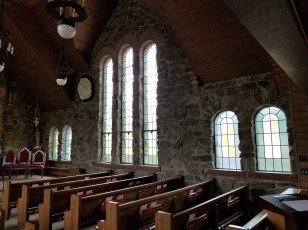 We also stopped by the Long’s Peak trailhead, just to look. Long’s Peak is the highest peak in Rocky Mountain National Park, and about a 16-hour hike. Wow! I am not sure 5 1/2 months is long enough to get that strong! 🙂

Just another amazing day in paradise! If you’d like to read more about the special places “Around Estes” that are NOT in Rocky Mountain National Park, go here. 🙂